In July of last year I wrote a Daily called "Hero of the Week" about John McCain's "thumbs down" vote that killed the "Skinny Repeal" legislation, the Republicans' last attempt to rollback Obamacare.

One reader condemned me for praising the Arizona Republican and former GOP 2008 presidential nominee. Another, citing the votes of the Senator's two GOP female colleagues on the bill, chastised me for "giving the man the medal when it really belongs to the women."

... and few are more deserving of medals than John McCain, a decorated Vietnam war veteran who was held captive and tortured for more than five years before dedicating the rest of his life to public service. 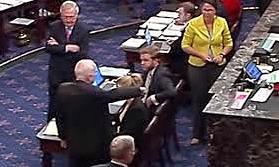 McCain gives the "thumbs down" on the Senate Floor. "Our deliberations can still be important and useful, but I think we'd all agree they haven't been overburdened by greatness lately. And right now, they aren't producing much for the American people"

The defeat of the GOP healthcare bill was one of several blows McCain dealt to President Trump -- not on behalf of a political party, but on behalf of the American people.

But McCain's vote, and the message behind it, carried even more weight, as he had just returned from surgery for Glioblastoma, an aggressive brain cancer.

It would be his last appearance on the Senate floor.

Saturday he lost his final battle -- nine years to the day after the same rare disease took the life of one of his dearest friends, Democratic Senator Edward Kennedy. 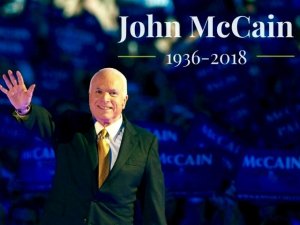 The McCain-Kennedy relationship was an example of the bipartisan, concensus-building philosophy that earned McCain his indomitable reputation for being able to work across the aisle.

This was evident in his 36 years of service in Congress. While a tenacious hawk as Chair of the Armed Services Committee, the self-proclaimed "Maverick" was an historic leader on campaign finance reform and an advocate of more liberal immigration reform.

The universal respect for the man and the legacy he leaves is evident in the public mourning nationwide, and the upcoming ceremonies, worthy of the Presidential office he was never able to reach.

The country has lost a champion and, yes, a hero.