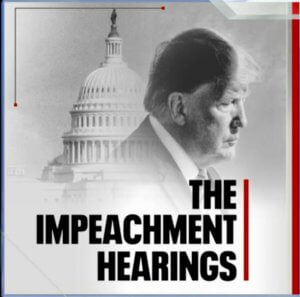 In the third, marathon day of testimony in the Trump Impeachment proceedings, the House Intelligence Committee and the American public heard from first-hand witnesses to the July 25th Trump-Zelensky call that is at the heart of charges against the US President.

Like last Friday's testimony by former US Ambassador to Ukraine Marie Vovanovitch, Tuesday's witnesses painted a clearer picture of the larger corruption plot surrounding the scandal and final act that propelled President Trump toward impeachment.

THE WITNESSES
Tuesday's morning session featured Jennifer Williams and Lt. Colonel Alexander Vindman, who were both on the now infamous call between President Trump and new Ukraine President Zelensky.

According to both, Trump threatened to hold up critical aide to Ukraine, while pressuring the Ukrainian leader to work with Attorney General Willam Barr and Trump's personal attorney, Rudy Giuliani to open an investigation into 2016 and Burisma.

Jennifer Williams, Senior Adviser to Vice President Mike Pence on Europe and Russia
A Georgetown graduate and former field operative for the 2004 Bush-Cheney campaign, Williams first served as a political appointee under Homeland Secretary Michael Chertoff in the Bush administation.

She joined the State Department in 2006, initially focusing on Middle East policy, serving in Lebanon and Jamaica before managing US humanitarian assistance for Syrian refugees from 2011-2014. Williams was then Special Assistant to the Assistant Secretary of State for Near Eastern Affairs, before becoming the Press Officer to the US Ambassador in London for three years. In April of 2019, she was detailed from the State Department to the Vice President's office. 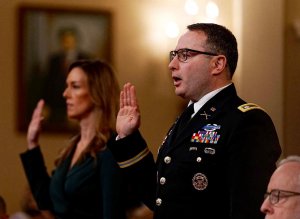 Williams and Vindman are sworn in (Pic: Mahaskey/Politico)

Highlights
* Williams testified that she listened in on the July 25th Trump-Zelensky call, took notes and detailed her concerns in a hard copy -- which she provided to Vice President Pence the same day. Pence has since tried to distance himself from Williams.
* Trump's request to Zelensky on the call to investigate his political rivals was "unusual and inappropriate" and "shed some light on possible other motivations behind a security assistance hold"...Trump's "personal political agenda" as opposed to "a broader foreign policy objective of the United States."
* The White House's public transcript of the call omitted key phrases, including reference to the investigations.
* In mid-May, President Trump instructed Pence to cancel plans to attend President Zelensky's inauguration.
* The White House has blocked Williams from speaking publicly about an additional call between Trump and Zelensky on September 18th, identifying the call as classified.

Lieutenant Colonel Alexander Vindman, National Security Council Director for European Affairs
Vindman immigrated from Ukraine, then a part of Russia, with his father and twin brother at age three. He is a Harvard graduate and decorated Army veteran who has been awarded a Purple Heart, Ranger Tab, Combat Infantryman Badge, Expert Infantryman Badge, and Parachutist Badge, as well as four Army Commendation Medals and two Defense Meritorious Service Medals.

Vindman became a Foreign Area Officer specializing in Eurasia in 2008, serving in the US embassies in Kiev, Ukraine, and Moscow, Russia. In 2015 he served as a Russia expert for the Joint Chiefs of Staff, before moving to the National Security Council in the White House in July, 2018.

He was a part of the US delegation that attended Zelensky's inauguration on May 20, 2019, which included Energy Secretary Rick Perry, US Special Representative for Ukraine Kurt Volker, US Ambassador to the European Union Gordon Sondland, and Joseph Pennington, then Acting Chargé d'Affaires. 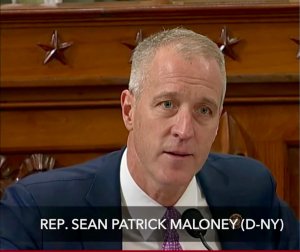 Highlights
* Vindman testified, referring to Rudy Giuliani, "In Spring of 2019, I became aware of outside influencers promoting a false and alternative narrative of Ukraine inconsistent with the consensus views of the interagency," which was "harmful to U.S. national security."
* At Zelensky's May, 2019 inauguration, Vindman warned the Ukrainian President "to be particularly cautious with regard to Russia and its desire to provoke Ukraine, and to stay out of U.S. domestic" politics.
* It had become clear that "there were public actors, non-governmental actors that were prompting the idea of investigations ...It was also clear that if Ukraine pursued an investigation into the 2016 election, the Bidens, and Burisma, it would be interpreted as a partisan play. This would undoubtedly result in Ukraine losing bipartisan support, undermine US national security, and advance Russia's strategic objectives in the region."
* Vindman contacted NSC lawyer John Eisenberg about "unduly political" actions in a July 10th meeting with Ukrainian officials in which Sondland conditioned a Trump-Zelensky White House meeting on Ukraine opening investigations into the Bidens. Perry and Volker were also at the meeting, as was US National Security Advisor John Bolton and then-NSC Advisor Fiona Hill -- both of whom told Sondland his comments were "inappropriate."
* Vindman also reported Trump's July 25th phone call comments regarding investigations to Eisenberg "without hesitation." Congressman Patrick Maloney (D-NY) asked him about the call.

President Trump has attacked Vindman on twitter and Senator Ron Johnson (R-WI) earlier claimed Vindman was part of a "deep state" rebellion. Amid these attacks and others by White House allies, Vindman has asked the US Army for security for his family. 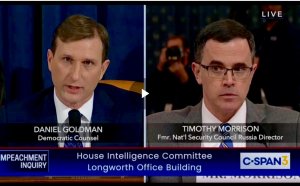 The six-hour afternoon session featured Tim Morrison and Kurt Volker. Both were requested by Republicans, but their testimony was ultimately damning to the President.

In July, 2018 he became Senior Director for Countering Weapons of Mass Destruction on the US National Security Council, a position he held until August, 2019 when he took over as NSC Advisor on Russia and Europe after his predecessor, Fiona Hill, resigned. Morrison resigned from that post on October 31, 2019.

Highlights
* Morrison testified as a participant on the July 25th Trump-Zelensky call. Although he initially said he did not believe the President did anything illegal, he reported the call to NSC legal counsel John Eisenberg for review because of increasing concerns over the delay of the US military aid to Ukraine.
* Morrison feared public disclosure of the phone call and how it "would play in Washington's political climate." He added, "My fears have been realized."

* Ambassador Sondland, who spoke directly and regularly with Trump, told Morrison he had briefed the President prior to the Zelensky call - a fact Morrison confirmed through other sources.

* When asked if he told National Security Advisor John Bolton about this conversation, Morrison said yes, and that Bolton said, "Tell the lawyers."  Bolton resigned from his position September 10, 2019.

Kurt Volker, former US Special Representative for Ukraine Negotiations
Volker worked as a CIA analyst before joining the State Department in 1988. As a Foreign Service Officer he served in London and Brussels, in Budapest (1994-1997) and Bosnia. 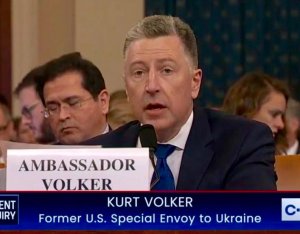 From 1998 to 2001 Volker worked with NATO before moving to the NSC's European and Eurasian Affairs office, and, in 2008 was appointed as Ambassador to NATO.

In 2009 he entered the private sector, working with various investment and lobbying firms before becoming Director of the McCain Institute for International Leadership. In July, 2017, Secretary of State Rex Tillerson appointed Volker as US Special Representative for Ukraine Negotiations, a voluntary position he held until his resignation on September 27, 2019.

Volker, Sondland, Secretary Rick Perry and White House Chief of Staff Mick Mulvaney have been identified, in other testimony, as working with Rudy Giuliani to facilitate through "irregular channels" an agreement with the Ukrainians to launch an investigation into Trump's political rivals.

* Volker amended his earlier closed-door testimony that "investigations" were not mentioned in the July 10th meeting with Ukrainian officials, to say that "Sondland made generic comments about investigations. I think all of us thought it was inappropriate."
* "At the one in-person meeting I had with Mayor Giuliani on July 19th, Mayor Giuliani raised, and I rejected, the conspiracy theory that Vice President Biden would have been influenced in his duties as Vice President by money paid to his son. As I previously testified, I have known Vice President Biden for 25 years. He is an honorable man and I hold him in the highest regard."
* Volker warned Zelensky that Rudy Giuliani was negatively influencing Trump's view of Ukraine. "The negative narrative about Ukraine which Mr. Giuliani was furthering was the problem. It was, in my view...impeding our ability to build the relationship the way we should be doing."

Up Next
November 20th (Wednesday)
* Gordon Sondland, US Ambassador to the EU
* Laura Cooper, Dep Asst Secretary of Defense for Russia, Ukraine and Eurasia
* David Hale, Under Secretary of State for Political Affairs