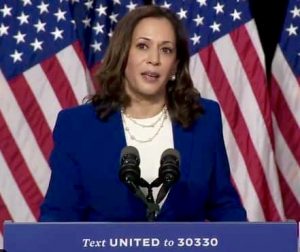 Yesterday, future Democratic Presidential nominee Joe Biden formally introduced his running mate, Senator Kamala Harris, with the two appearing together for the first time as the Democratic presidential ticket and future of our country.

Clad in masks, the two walked onto a Wilmington, Delaware stage together, accompanied by the Curtis Mayfield song "Move On Up," to launch their truly historic campaign.

"Joe, I'm so proud to stand with you. And I do so mindful of all the heroic and ambitious women before me whose sacrifice, determination, and resilience makes my presence here today even possible."

There are many other women, however, who helped pave the way over the last 150 years to bring us to this point. For our readers, a history lesson in the women who have run for President and Vice President!

As compiled by Rutgers Center for American Women and Politics, our abbreviated version includes all parties and is based on those who achieved historic firsts, national recognition in office or on the ballot, received federal matching funds and/or other factors. 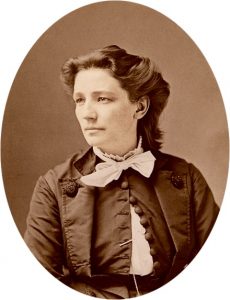 Victoria Claflin Woodhull (1872): Equal Rights Party. New York. Often cited as the first woman to run for President, although she was legally, at 33, too young. Opponents: Ulysses S. Grant (R) and Horace Greeley (D). Newspaper founder and first woman to own a Wall Street investment firm.

Marietta Stow (1884): Equal Rights Party. The first woman to run for vice president in the United States, she ran as the running mate to Belva Lockwood.

Lena Springs (1924): Democrat. The first woman to have her name placed into nomination for vice president at a major-party political convention. As credentials committee chair, received several votes.

Margaret Chase Smith (1964): Republican. Maine. The first woman to have her name placed in nomination for President by a major party, with 27 first ballot votes at the Convention. Elected to Congress in 1940 to fill her late husband's seat, serving four terms. Elected in 1948 to the US Senate and served four terms. 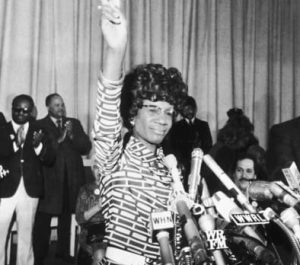 Shirley Chisholm (1972): Democrat. New York. The first African American woman to seek a major party's nomination for President. On the ballot in twelve primaries and received 151.95 delegate votes at the Democratic National Convention. The first African American woman to serve in Congress, from 1969 to 1983. Previously in the New York state legislature from 1964 to 1968. A champion of women's rights.

Patsy Mink (1972): Democrat, Hawaii. Ran as an anti-war candidate in the 1972 Oregon presidential primary, winning 2% of the vote. The first woman of color elected to Congress. serving from 1964 until her unsuccessful 1977 Senate bid. Elected again to Congress 1990-2002.

Toni Nathan (1972): Libertarian. The first woman to receive an electoral vote (just one), when a Virginia Republican elector voted for President Nixon, but declined to vote for Vice President Spiro T. Agnew.

LaDonna Harris (1980): Citizens Party. A social activist and member of the Comanche Tribe, she was the first Native American nominee for vice president, running on the ticket with Barry Commoner in 1980. 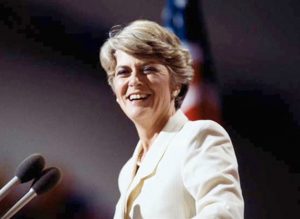 Geraldine Ferraro (1984): Democrat. New York. Ferraro was the first woman vice presidential nominee of a major US party, running with Walter Mondale on the ticket, which received 13 electoral votes. Attorney and Member of Congress from 1979 to 1985, and later as Ambassador to the United Nations Commission on Human Rights from 1993 until 1996 in the Clinton administration.

Patricia Schroeder (1988): Democrat. Colorado. Brief run for president in 1988 before dropping out before the primaries. Attorney, first elected to Congress in 1972 and served 24 years. 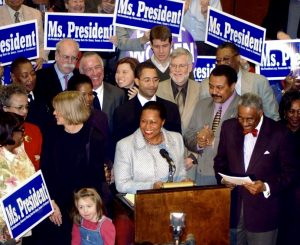 Elizabeth Hanford Dole (2000): Republican. North Carolina. Ran for the 2000 presidential nomination, but dropped out before the primaries. Attorney, served in the Nixon, Reagan, and George H. W. Bush administrations, and in the US Senate from 2003 to 2009.

Carol Moseley Braun (2004): Democrat. Illinois. Sought the 2004 presidential nomination, but dropped out prior to the Iowa caucuses. Attorney and first African American woman to serve in the US Senate, from 1992-1998. US Ambassador to New Zealand in the Clinton administration.

Michele Bachmann (2012): Republican. Minnesota. Ran for the 2012 nomination for president but withdrew after the Iowa caucuses.  Attorney, US Congresswoman Bachmann from 2007-2015, Tea Party founder. 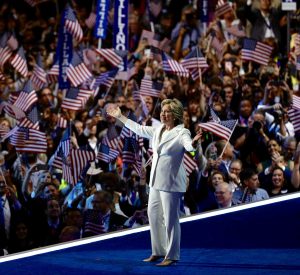 A candidate for the Democratic nomination for President in 2008, Clinton lost to Senator Barack Obama, who then appointed her US Secretary of State, a position she held from 2009-2013. In July of 2016 Clinton became the first woman to be a major party's nominee for President. Despite winning the popular vote by almost 3 million votes, she lost the Electoral College and the election, to Donald Trump.

Carly Fiorina (2016): Republican. California. Ran for the 2016 GOP nomination but withdrew after the New Hampshire primary. A former CEO of Hewlett-Packard and unsuccessful 2010 nominee for US Senate.

September  18, 2018 The confirmation battle for President Trump’s Supreme Court nominee Brett Kavanaugh has reached fever pitch in the wake of allegatons against the Judge that he sexually...