Santa Fe, Texas.  Ten more dead, eight of them children. The shooter: a 17 year-old classmate.  The weapons: a sawed-off shotgun and a .38 caliber handgun. The 16th school shooting in America in 2018. 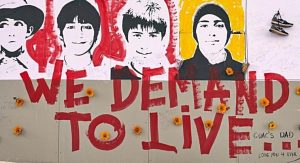 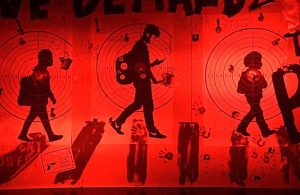 Manual Oliver is traveling the country using art to bring attention to gun violence issue. He will be doing 17, one for each Parkland victim

The Decision Makers
Since Parkland

President Trump reversed his commitment, made
in person at the White House to Parkland student survivors, that he would raise the gun purchasing age.

Congress has not passed any gun safety legislation.

It was reported that in 2018 election cycle Gun rights groups, like the National Rifle Association (NRA), have so far outspent gun control organizations by forty to one.

On Sante Fe
Congressman Randy Weber (R), whose 14th District represents Santa Fe High School, said, "Gun control is an interesting term when you think about it," and deferred to mental illness as the cause that "needs to be part of that discussion."

In 2016 Weber introduced House Bill 4550 "to permit active and retired law enforcement officers and persons who are legally allowed to carry a concealed firearm under state law to bring their firearms onto traditionally gun-free school grounds."

Texas Lt. Governor Dan Patrick (R) said the school shootings are "not about guns," blaming video violence, irresponsible gun owners, lack of enough building exits, abortion, families without fathers, and because "we threw God out of the school(s)."

What Can You Do?
Vote: Find Your Primary Election