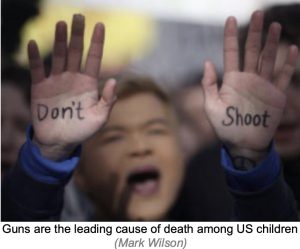 In the more than six years that I have been writing the DemDaily column, over 30 articles have been dedicated to the subject of gun violence in America.

The tragedies have been many, the public outcry deafening, the thunder of fists and boom of voices heard in legislative chambers and in Congress, and broadcast for the record.

Yet the statistics are the same and the status unmoved, with no major legislation passed in the United States Congress during that period, or, in fact, for almost three decades.

We are once again reminded that, while gun violence is still one of the most pressing issues of our time, it continues to be buried among other legislative priorities. Until, of course, the next mass shooting.

Texas, with some of the most gun-friendly laws in the nation, has been home to some of the deadliest mass shootings in the US over the past five years. Mass shootings are defined as those in which four or more people are injured or killed, not including the perpetrator.

That included freeing Texans from a permit requirement, thereby allowing individuals to carry handguns in public without a license, background check, safety training or a proficiency test.

While Texas' existing law limits the purchase of handguns to age 21, it is legal for 18-year-olds to buy a long gun or rifle, such as an AR-15, which was originally designed for combat warfare.

Another new Abbott law prohibited "any government entity from contracting with any business that discriminates against firearm and ammunition businesses and organizations like the NRA." 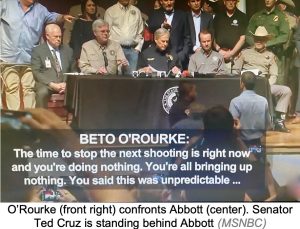 At a Wednesday news conference about the mass shootings, Abbott responded to the crisis by saying this is not a gun issue, but a "mental health" issue, while failing to mention that last April he slashed $211 million dollars from the department that oversees mental health programs in Texas.

Abbott was angrily confronted by former Democratic Congressman Beto O’Rourke who is challenging Abbott in the November gubernatorial election.

Amid a heated exchange from the dais filled with GOP officials, Uvalde Mayor Don McLaughlin (R) called O'Rourke "a sick son of a bitch that would come to a deal like this to make a political issue.”

As O'Rourke was escorted out of the room, he turned back to Abbott saying, “This is on you until you choose to do something different. This will continue to happen.” 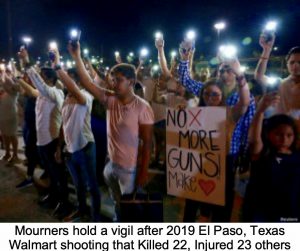 What Now?
In Congress, Senate Majority Leader Chuck Schumer has called on his colleagues to bring stalled House-passed legislation to the floor.

In 2021, the US House passed two bills aimed at strengthening the nation's gun laws, including requiring background checks on all gun sales and transfers, and extending the time for the FBI to vet those flagged by the national instant check system.

Other legislation introduced in the House and the Senate centers on red flag laws, which allows for an “extreme risk” protective orders barring people from buying or possessing firearms if a judge deems them to be a threat to themselves or others. Additional gun safety measures include legal requirements for firearms retailers, safe storage of firearms, a ban on assault rifles and on homemade "ghost guns," a prohibition on high-capacity magazines, and an increase in the age requirement for gun purchase, among others.

Connecticut Senator Chris Murphy (D-CT), whose home state was the site of the 2012 Sandy Hook murders, is leading the bipartisan negotiations. With opposition from the GOP on most of these measures, however, it is unlikely that Democrats could secure the 60 votes needed to override a filibuster and pass any substantive legislation in the US Senate.

In the interim, the US Supreme Court is expected to announce a decision soon on New York State Rifle & Pistol Association v. Bruen, which challenges New York's strict license requirement for caring guns in public. The High Court's 6-3 conservative supermajority is expected to overturn the New York law.

The February 23-25th DNC Winter Meeting in Atlanta, Georgia, and the elections for the new leadership of our Party is just three weeks away!

July 8,  2022 To remind us to laugh. On the Supreme Court’s year Stephen Colbert referred to the court’s year of bold calls as “a real roller-coaster ride, in that I am nauseous and scared we’re...