Yesterday, three years and eight months after he executed one of the deadliest school shootings in American history, 23-year-old Nikolas Cruz pleaded guilty to 17 counts of murder and 17 counts of attempted murder.

The fate of "The Parkland Shooter," who massacred faculty and fellow students at Marjory Stoneman Douglas High School in South Florida, will not be determined for months.

In the interim, the event was a stark reminder that gun violence is still one of the most pressing issues of our time, and one that has once again gotten buried amid other legislative battles - until the next mass shooting.

Every day in America, more than 100 people are killed with guns and 216 more, on average, are shot and wounded. The gun homicide rate in the United States is 25 times higher than that of other developed countries. 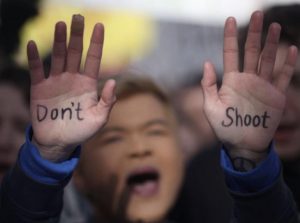 According to the Gun Violence Archive, there have been 36,038 gun violence deaths so far this year, including 16,634 Homicide or Murders, 19,404 Suicides, and 572 mass shootings -- those in which four or more people are injured or killed, not including the perpetrator.

* Directing the Department of Justice (DOJ) to propose a regulation to stop the proliferation of deadly, untraceable "ghost guns," made from kits.

* Directing DOJ to propose a regulation ensuring that stabilizing arm braces that circumvent the law on dangerous short-barrel rifles are subject to the National Firearms Act. 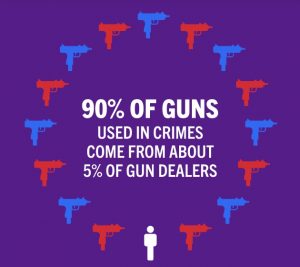 * Publishing a model state red flag law for the states. Also known as Extreme Risk Protection Order laws, they allow courts to temporarily seize firearms from anyone believed to be a danger to themselves or others.

* The President nominated David Chipman, a former ATF special agent and gun safety advocate, to be Director of the Bureau of Alcohol, Tobacco, Firearms and Explosives. In a major victory for the gun lobby, Biden withdrew Chipman's nomination in September after it appeared he was one vote short of confirmation.

Access to a gun in a home increases the risk of death by suicide 300%. 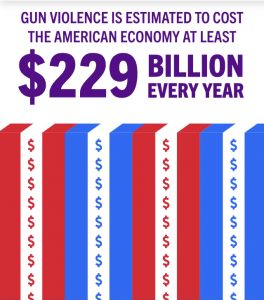 Companion legislation proposed in the US Senate is still awaiting action by the Judiciary Committee. With the 60-vote threshold need to override a filibuster in the Upper Chamber, however, the chances of passing the first major gun control legislation in decades seems out of reach for this Congress.

The last major piece of gun control legislation to make it into law was the 1994 assault weapons ban, which expired in 2004. Repeated attempts to renew it have failed.

State laws, and the laws of the District of Columbia and of the U.S. territories, vary considerably, and are independent of existing federal firearms laws.

While forty-four states have a provision in their state constitutions similar to the Second Amendment of the US Constitution, which protects the right to keep and bear arms, many have enacted responsible gun safety laws in response to the gun violence crisis.

Despite the limitations imposed by COVID in 2020, legislatures passed 43 gun safety laws in 13 states, bringing the total number of laws enacted since the 2018 Parkland shooting to 180.

Of the 10 states with the strongest gun laws, seven of them have the lowest gun death rates. California continues to have the strongest gun safety laws in the country, while Mississippi, which has the second-highest rate of gun deaths per 100k people, has the weakest.

At issue is whether the state of New York's denial of petitioners' applications for concealed-carry licenses for self-defense violated the Second Amendment, setting up a challenge to the meaning of the "right to bear arms."

This is the first substantial case involving gun laws since 2008's McDonald v. Chicago, when the court ruled for the first time that people have a constitutional right to have a gun in their homes for self-defense.

A March 6-8, 2021 Morning Consult/Politico poll of registered voters showed 84%, including 77% of Republicans, support requiring all gun purchasers to go through a background check.

See Gun Laws In Your State

Tell The Senate To Take Action on Background Checks: Sign The Petition

More On The Appropriations Bill Funding for Gun Violence Prevention

December 5, 2022 The Democratic National Committee has advanced a dramatic new proposal for the 2024 Democratic presidential primary calendar, which would upend Iowa’s coveted “first...

June 1. 2018 A key component of DemList’s mission is promoting the good work of the players and allies. One who has played multiple roles in shaping and advancing the progressive movement is...