The dramatic saga surrounding the fight for the Speaker of the US House of Representatives continued today, with a seventh, eighth, ninth, 10th and 11th failed round of votes for the nomination of Republican Kevin McCarthy (CA). 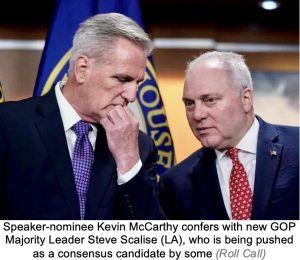 The battle is not being waged between Democrats and Republicans, but between two warring factions of the GOP, reflecting the deep divisions that cost them the anticipated red wave of wins in the November midterm elections.

With a narrow majority of just nine seats over Democrats, it takes just five GOP members to block McCarthy from obtaining the 218 votes needed to secure the speakership. An ultra-right "never-Kevin" coalition of 20 representatives have been unwavering in their determination to prevent McCarthy, who has served as House Minority Leader under the last four years of Democratic control, from being seated as speaker.

The bitter standoff -- the longest since 1859 -- has played out over three days and 11 floor votes, with little or no change in the number of votes.

The rebel GOP members, most of whom belong to the conservative House Freedom Caucus, have instead nominated a musical chair of names from Jim Jordan (OH), Andy Biggs (AZ), Byron Donalds (FL), Kevin Hern (OK), and even former President Donald Trump. 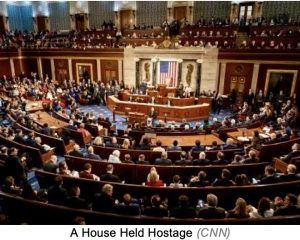 While the 20th amendment of the Constitution mandates that the first day of each new Congress shall commence at noon on the third of January, rules dictate that the business of the US House cannot proceed without the election of its presiding officer, the Speaker.

As that includes swearing in of new members, the US House is at a standstill, unable to proceed with legislation, confirm committee assignments, and, in the case of freshman members, even set up the fundamental components of their staff and offices.

The GOP insurrectionists, for now, hold the keys to that kingdom.

At just after 8:00pm tonight the House adjourned. It will reconvene Friday at 12:00pm when they will begin again.