Democrats knocked Republicans out of the park, 21 to 5, in last night's 57th annual Congressional Baseball Game. 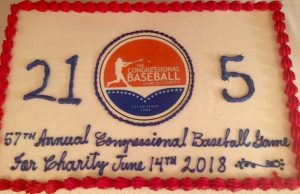 The GOP kicked off well with the most memorable play of the night, when Congressman Steve Scalise (R-LA) tagged the first runner of the game out, sending the crowd of 17,000 into a feel-good frenzy.

Scalise is still recovering from the tragic shooting that took place just days before last year's game, when a lone gunman opened fire on Republican Members of Congress who were practicing in Alexandria, Virginia.

The shooter critically wounded the House Republican Whip and injured two officers, a lobbyist and hill staffer before being killed by Capitol Hill police. 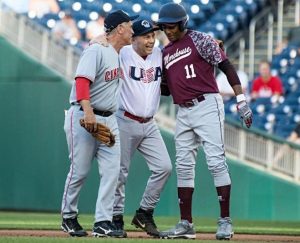 Off the Floor and on the Field
First started as a casual game among colleagues in 1909, the Congressional Baseball Game has been an established annual event since 1962.

Members of Congress and fans look forward to the competition as the one occasion when lawmakers of each party put aside partisan politics and play baseball in a friendly competition to raise money for charity.

Members, sporting the uniforms of their home states, raise over $1 million each year for the Washington Literacy Center, The Boys and Girls Club of Greater DC, the Washington Nationals Dream Foundation, and the United States Capitol Police Memorial Fund. 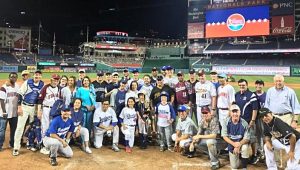 "It is a fine thing when two great parties of a great Nation, the greatest Nation on the face of the earth, can drop the care and worries of Capitol Hill, forget about the heat and temporary animosities of debate, and go out at night to a baseball field where the great American game is played." - Congressman James Richards, Congressional Baseball Game, 1948

Win Washington Nationals Tickets and Benefit the Paul Booth Legacy Trust!  The next game is June 21st against the Orioles!

DemDaily: The COVID Count. In Your State

March 1, 2021 On Saturday, the FDA issued emergency use authorization for Johnson & Johnson’s vaccine, offering a third line of defense in the war being waged against the deadly...