The gloves are off in one of the country's most contested Governors races, one that could produce our country's first black female Governor.

In Georgia, where former State House Minority Leader Stacey Abrams (D) is sparring off with Republican nominee and current Secretary of State Brian Kemp for the open Governor's seat, the final battle is meeting all expectations.

The Setup
One of those is Georgia, where Republicans currently hold a state government trifecta, with control of the Governor's mansion and a majority in the State Senate and State House. 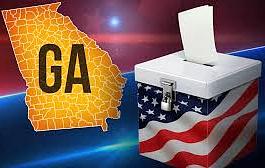 In the State Senate, however, the GOP holds 37 seats to Democrats' 19, one short of the two-thirds supermajority that can override gubernatorial vetoes and certify constitutional amendments for the ballot. Similarly, in the State House, Republicans control 118-62, two short of a supermajority.

Under Georgia state law, the legislature is responsible for drawing new maps for US House and state legislative seats under redistricting, but the Governor has the power to veto their proposed plan.

The current Governor is term-limited Republican Nathan Deal, who defeated former Governor Roy Barnes (D) in 2010 by 10%, and was reelected in 2014 by 7.9%.

The Candidates
Democratic nominee Stacey Abrams, is a lawyer, social entrepreneur and novelist who served as Atlanta's Deputy City Attorney before winning a seat in the State House in 2006 and going on to serve as Minority Leader of the Georgia House from 2011 to 2017.

Abrams won the May 22nd primary against former State House Rep Stacey Evans 76.44% to 23.56% to become the first black woman in US history to secure a major party gubernatorial nomination, and the first woman of any race to do so in Georgia history.

Republican nominee and businessman Brian Kemp served in the Georgia State Senate from 2003-2007 and ran unsuccessfully for the Republcan nomination for State Agriculture Commissioner in 2006. 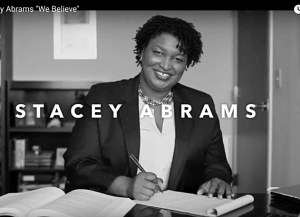 With the endorsement of President Trump the week before the runoff, however, the hardline Kemp who touted anti-immigration and pro-gun policies, defeated Cagle, the institutional favorite, 69.45% to 30.55%.

The heated contest, which has drawn national attention, has broken records with a combined total of $56.5 million raised by the two candidates.

The state, which boasts a 30+% African American population, is also witnessing unprecedented early vote numbers. As of Wednesday over 295,000 voters had cast their ballots by mail or at the polls, compared to 100,400 during the same period in the 2014 midterms.

There are 53,000 voter registrations, however, that have been put on hold by Kemp who, as Secretary of State, oversees the state's "exact match" voter verification process - which requires voter applications to precisely match the information on file with the Georgia Department of Driver Services or the Social Security Administration. 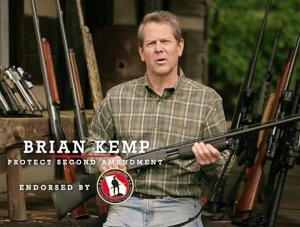 Concerns of voter supression are widespread. On Monday, the first day of early voting in Georgia, dozens of black senior citizens headed to the polls were stopped by county officials and turned away. There justification was that there transporation was organized the non-profit Black Voters Matter, thereby constituting prohibited "political activity."

We may have to wait longer than November 6th to find out if Abrams makes history. There is a third candidate, Libertarian Ted Metz, who received only 3.4% of the vote when he ran unsuccessfully for Insurance Commissioner in 2014.

With three candidates on the ballot in a tight race, however, it is possible that no one will receive more than 50% of the vote on November 6, which would force the contest into a runoff election on December 4, 2018.

As always, a few votes will make the difference.