Posted May 12, 2017 | by KimS | in Cabinet, DemDaily, Resource, Trump Administration

The internet and airwaves are rife with calls for President Trump's impeachment, but what does that mean and is it possible?

There are essentially four ways of getting rid of a President: Impeachment and conviction by the US Congress, removal by the Cabinet, resignation or death in office.

Impeachment
The House of Representatives has the sole power to impeach a president, but removal from office is contingent upon trial and convention by the United States Senate.

Think of Impeachment by the House, which requires a majority vote, as an indictment in regular court proceedings. If passed, then it goes to the second stage of a trial before a judge and jury, which is the Senate's role, and requires a 2/3 vote of those present to convict and remove the president from office.

Only two US Presidents have been impeached: Andrew Johnson, in 1868, for violation of the Tenure in Office Act, and Bill Clinton, 1998, for perjury and obstruction of justice. In both cases the Senate failed to convict.

To date, no U.S. President has been removed from office by impeachment and conviction. 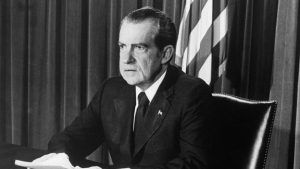 Nixon Resigned before House could Impeach

Resignation
While articles of impeachment were brought against President Richard Nixon by the House Judiciary Committee in 1974, Nixon resigned the Presidency before a vote could be taken by the full House.

The Cabinet
That leaves removal by The Cabinet. Originally intended for transfer of power to address illness in office, the 25th Amendment to the Constitution allows for a sitting vice president and a majority of the executive branch's cabinet to, upon agreement, transfer power out of the hands of a sitting president.

In all cases, the chain of succession to the Presidency is the same. Should something cause Mr. Trump to leave office before his term is out, the White House goes to:

Order of Succession to the President (left, the right)

A coup by the VP and Cabinet, who owe their positions to the President, is highly unlikely. Likewise, the chances of pushing an impeachment and conviction through the GOP-controlled House (238R/193D,4 Open) and Senate (52R/46D, 2 Ind), would be all but impossible.

The Answer: Elect a Democratic Congress in 2018. Are you motivated?

October 6, 2020 Voters in 32 states will decide 120 statewide ballot measures on November 3, 2020. Ballot initiatives are an integral part of our electoral process – as a form of direct...