In a win for Democrats this week, a North Carolina state court ruled that the state's current congressional district map is unconstitutional partisan gerrymandering, barring its use in the 2020 elections, including the March presidential primary.

The decision is an important victory for Democrats following the US Supreme Court's decision last summer to defer to the states on gerrymandering, one that involved North Carolina, which has a rich history with the practice. 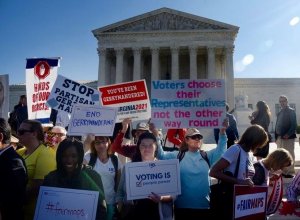 Background
The Tar Heel State's current map was drawn by the GOP-controlled legislature in 2016 after a court declared the congressional district boundaries, drawn in the 2011 redistricting, to be unconstitutionally racially gerrymandered.

The 2016 map, however, was drawn to ensure the partisan breakdown of the state's congressional delegation, which stands at 10 Republicans to three Democrats.

That led to a legal challenge to the GOP-drawn maps in state courts. The case, Rucho v. Common Cause was one of two that were heard before the US Supreme Court in June of 2019.

The 5-4 decision, delivered by Chief Justice John Roberts and joined by the four other conservative justices, was considered a victory for Republicans, who control 61 of the 99 state legislative chambers through the country.

As in North Carolina, most state legislatures control the decennial redistricting process, which determines the electoral district boundaries for the purposes of electing representatives to a legislative body. 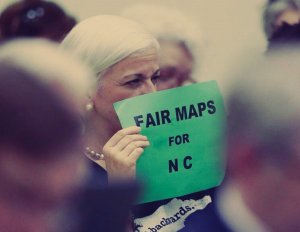 Gerrymandering, the practice of drawing or manipulating those district lines to the unfair political advantage of a particular party or group, has been the subject of lawsuits filed in over a dozen states in the last two years -- most with the objective of reaching the high court.

In the ruling, Justice Roberts, while acknowledging that extreme partisanship in drawing districts does lead to results that "reasonably seem unjust," stated that it is not up to the courts to determine a remedy for what is a political issue.

Justice Elena Kagan, speaking for the Dissent, said, "The practices challenged in these cases imperil our system of government. Part of the Court's role in that system is to defend its foundations. None is more important than free and fair elections."

The Decision
With the issue back in the hands of the state courts, a new case was filed on behalf of the citizens of North Carolina by the National Redistricting Foundation, an arm of the National Democratic Redistricting Committee, which is led by former Obama Attorney General Eric Holder.

In its decision, the North Carolina court suggested "the General Assembly, on its own initiative, act immediately and with all due haste to enact new congressional districts," but Republican legislators could still file a motion for summary judgement, or reconsideration, or could still appeal the motion to the state Supreme Court.

In September, the same three-judge panel struck down a majority of the Republican-drawn State House and Senate districts as partisan gerrymandered. In that case, the GOP declined to appeal and, instead, elected to redraw the maps, which were approved by the court on Monday.

With North Carolina's shifting voter demographic, a new, fairly-drawn map would make it difficult for Republicans to maintain ten of thirteen US House seats in 2020.

In the 2018 midterm elections, despite the gerrymandered map, Democrats broke the Republican supermajority in the N.C. General Assembly, and cast more votes than Republicans in the Congressional contests.

For now, it is advantage Democrats.

February 14, 2018 On Monday the Trump Administration released its long-awaited infrastructure plan, which on the surface calls for a $200 billion federal investment over the next decade. One need...