In a win for gerrymandering justice, a federal Court ruled Thursday that Michigan's state legislative and congressional district map was unconstitutionally drawn to the advantage of Republicans.

The decision is the latest in a series of lawsuits claiming unconstitutional gerrymandering in a dozen states.

A panel of three judges ruled in favor of the League of Women Voters of Michigan, who filed the suit, saying that the Republican-controlled legislature had unfairly drawn the lines to disadvantage Democrats and ensure their party continued to have a majority in state government.

"We find that the enacted plan violates plaintiffs' First and Fourteenth Amendment rights because it deliberately dilutes the power of their votes by placing them in districts that were intentionally drawn to ensure a particular partisan outcome in each district." 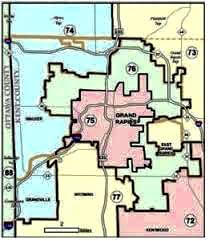 In their ruling, the judges pointed to a string of emails by Republicans who conspired in 2011 to draw lines strategically wrapped through GOP strongholds.

One email boasted of concentrating "Dem garbage" into four of the five southeast Michigan districts controlled by Democrats, and of packing African-Americans into a metropolitan Detroit House district.

Another email compared a narrow, fingerlike extension created in one Democratic district map to an obscene gesture toward its congressman. The author write, "Perfect. It's giving the finger to Sandy Levin. I love it."

"Federal courts must not abdicate their responsibility to protect American voters from this unconstitutional and pernicious practice that undermines our democracy," the judges wrote, adding that failing to protect voters' rights "will only increase the citizenry's growing disenchantment with, and disillusionment in, our democracy."

The court also ordered that special elections for affected State Senate districts be held in 2020, instead of the scheduled 2022 elections.

Historically, the lines for each of Michigan's 14 United States congressional, 110 State House and 38 State Senate districts were determined by the state Legislature, and approved by the Governor. 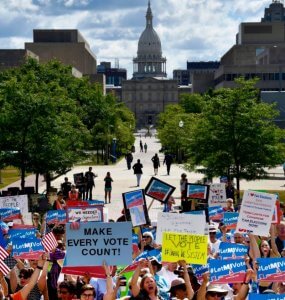 In the November 2018 elections, however, Michigan voted in their first Democrat Governor in eight years, Gretchen Whitmar, and overwhelmingly passed a redistricting reform measure.

Proposal 18-2, which won with 61% of the vote, is a ballot measure which amends the Michigan Constitution to move control of the redistricting process to an independent commission.

While this ensures a fair process in future redistricting processes, it does not apply to the current map, drawn in 2011 by the GOP majority in both state legislative chambers.

Now, following the District Court's decision, lawmakers will have to go back to the drawing board to produce new lines for districts that are agreeable to Whitmar. The court says the legislature must pass, and the governor must sign into law, new maps by August 1st or the court will draw the new maps itself.

SCOTUS
Republicans had appealed to Supreme Court of the United States (SCOTUS) to delay the lower court proceedings, but in February Associate Justice Sonia Sotomayor rejected a proposed settlement, clearing the way for yesterday's verdict. 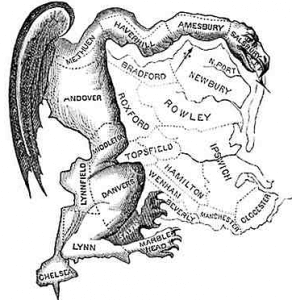 "Gerrymander" comes from a district drawn to benefit the party of Governor Eldridge Gerry (MA) in 1812, said to resemble the shape of salamander

Republicans, however, have vowed to appeal to SCOTUS for a stay of the US District Court decision, pending the high court's decision on two partisan gerrymandering cases.

The outcome of their decision, expected in June, will have a profound effect on the way political battlelines are drawn in the future.