Yesterday's multi-state primary may have widened the delegate gap for Joe Biden, but not enough to ultimately claim victory in his battle with Bernie Sanders for the Democratic nomination. 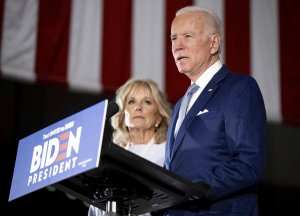 Biden: "Tonight we are a step closer to restoring decency, dignity and honor to the White House. That's our only goal" (Matt Rourke/AP)

In a pivotal point in the Democratic presidential primary contest, now down to the two frontrunners, Biden swept Mississippi with 81% of the vote, Missouri with 60%, and the night's big prize, Michigan, with 53%.

In Idaho, Sanders lost to Biden by 6 points, but was victorious in North Dakota with 53% to Biden's 40%.

With 67% reporting, Sanders and Biden are tied in Washington State, which is not expected to complete its tally until the end of the week.

With more than half of the total pledged delegates still up for grabs in the remaining 31 primaries, Sanders vowed today to stay in the race, and that he looks forward to challenging Biden in Sunday's debate.

The March 15th Phoenix, Arizona debate, hosted by CNN, Univision and the Congressional Hispanic Caucus, will be the first time the two will go one-on-one on stage.

Based on the Associated Press' current delegate count, as of 4:00 pm today, Joe Biden leads with 858 delegates to Bernie Sanders' 709. Delegate allocation, including over half of Washington State's 89, has yet to be completed. 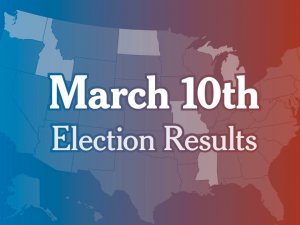 Rallying the Results
Democrats are united in their desire, and motivation, to defeat Trump, with AP exit polling showing "roughly 80% in each state say they will definitely vote for the Democratic candidate against Trump no matter who is nominated."

In Idaho and North Dakota, voter turnout quadrupled that of 2016; In Mississippi turnout was up 20%; in Michigan 30% and in Missouri by more than 5%.

In Washington State, where a majority of voters cast their ballot by mail, turnout is expected to end up at 60% of registered voters, a 51% increase over 2016.

Democrats Abroad, which conducted their global primary between March 3rd and March 10th, is not expected to report results before March 23rd due to the high volume of remote ballots.

There have been 26 primaries or caucuses to-date, accounting for a total of 1,864 delegates or roughly 47% of the 3979 pledged delegates who will be voting on the Democratic nomination in Milwaukee in July.

For Sanders to overcome Biden's lead, he will need to win an estimated 55% of the remaining delegates. 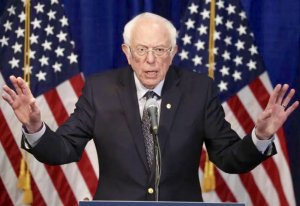 Sanders: "Donald Trump is the most dangerous president in the modern history...and must be defeated. I will do everything in my power to make that happen" (CharlesKrupa/AP)