That means more than one mass shooting, when more than four people are killed, happens every day in America.

That does not include three other high-profile shootings in the last week: July 30th at a Southhaven, Mississippi Walmart, killing two and injuring two; July 28th at the Gilroy, California Garlic Festival, killing three, including a six-year old boy and a 13 year-old girl, and wounding 12 others; July 27th at a Brooklyn, New York community festival, killing one and wounding 11 others.

The Stats
* Seven of the deadliest shootings in American history have occurred in the last ten years.

* An average of 100 people a day are killed by guns in the United States.

* The US population is just under 5% of the world's population but, according to Switzerland's Small Arms Survey, the U.S. accounts for 46% of the worldwide total of civilian-held firearms.

* According to Gifford Law Center, Gun violence costs 229 billion a year, including medical expenses, law enforcement and criminal justice costs, lost income, and pain and suffering. Most of this cost is borne by taxpayers. 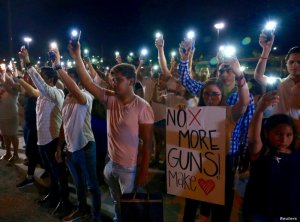 The Decision Makers
The President
The manifesto that the killer at the Walmart massacre echoed President Trump's words of "a Hispanic invasion" at the border.

Trump has consistently fueled the fire of prejudice, bigotry and fear-mongering racists in his Twitter feeds and public speeches. Most notable of those was in the aftermath of the deadly white supremacist rally in Charlottesville, when he said "there is blame on both sides...you had some very bad people in that group, but you also had very fine people on both sides."

After a steady decline from 2008 to 2014, hate crimes have taken a sharp rise. According to FBI Director Christopher Ray, "a majority of the domestic terrorist cases we have investigated, are motivated by some version of what you would call white supremacists."

The Congress
The last major piece of gun control legislation to make it into law was the 1994 assault weapons ban, which expired in 2004, and repeated attempts to renew it have failed.

Bodies are loaded after the Dayton Shooting Rampage (ViceNews)

The bill passed 240-190, largely along party lines. Eight Republicans voted with most Democrats in favor of the bill, and two Democrats, Congressmen Jared Golden (ME) and Collin Peterson (MN), voted against.

The bill has been stalled in the Republican-controlled Senate, and President Trump said he would veto the legislation if it came to his desk.

On Sunday, Ohio Senator Sherrod Brown (D) led the call for Republican Senate Majority Leader Mitch McConnell to call the Senate back from recess to vote on the bill.

The States
While the federal government continues to fail to act, state legislatures have taken the issue of gun violence into their own hands.

In 2018, 26 states and Washington DC passed 67 new gun safety laws. Four states raised the minimum age for firearms purchases, and seven states strengthened or expanded background checks for gun buyers. Of the 10 states with the strongest gun laws, seven of them have the lowest gun death rates.

California continues to have the strongest gun safety laws in the country, while Mississippi has the weakest.

The scene outside the Dayton Shooting the day after

On a state level, just nine states and the District of Columbia ban large-capacity ammunition magazines.

The People
In a Quinnipiac University Poll conducted May 16-20, 2019 of registered voters nationwide (MOError ± 3.7), 94% of Americans, including 92% of Republicans, support requiring background checks for all gun buyers.

Moms Demand Action: Text CHECKS to 64433
to be connected to your Senator
Everytown Gun Law Navigator: The Gun Laws in your State

January 25, 2023  Last Friday marked the two-year anniversary of the Biden-Harris Administration. When the President and Vice President were sworn in January 20, 2020, our country was suffering...

May 13, 2021 Now almost five months into the 2022 election cycle, eleven House members have announced their retirements or plan to leave to run for a higher office. The partisan breakdown of the...