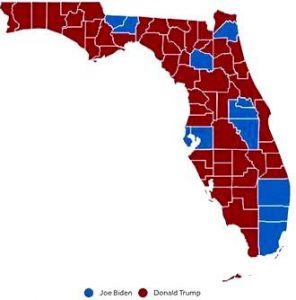 In the last three weeks, two prominent women have announced their bids for statewide office in what are expected to be among the most high profile, and most consequential, contests of 2022.

The announcements refocused attention on the Sunshine State, and kicked its election cycle into full gear with now multiple challengers to both embattled Republicans.

Marco Rubio was first elected to the US Senate in 2010, handily defeating Democrat Kendrick Meek and Independent candidate and former Governor Charlie Crist for the seat to succeed retiring incumbent Mel Martinez (R). 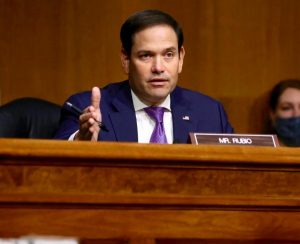 Rubio was a candidate for the Republican presidential nomination in 2016, but suspended his campaign after coming in a distant second to Donald Trump in the March 15th Florida Republican primary. He instead sought reelection to his Senate seat, successfully fending off a challenge by Democratic nominee Patrick Murphy, 52% to 44.3%.

She handily defeated Republican entrepreneur Thuy Lowe in the general, garnering nearly 65% of the vote, and was reelected in 2018 with 75% and 2020 with 63.6%. 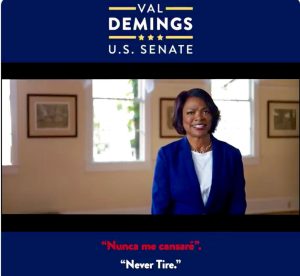 Demings previously spent 27 years with the Orlando Police Department, including the last four as Chief, the first woman to hold the position.

A member of both the House Intelligence and Judiciary Committees, Demings gained national recognition as one of the House managers, or prosecutors, in former President Donald Trump's first impeachment trial.

Demings, 64, was also on candidate Joe Biden's shortlist as a potential vice-presidential pick in 2020.

Four candidates have filed as Independents, one for the "Unity Party," and one for the Libertarian Party.

Ron DeSantis, the nation's youngest governor at 42, was elected in 2018, narrowly defeating Democrat Andrew Gillum, who would have been Florida's first black governor, by about 33,000 votes or just 0.4%. 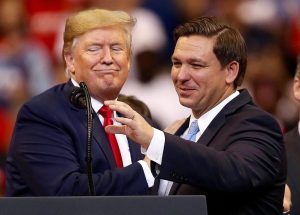 An attorney and Jacksonville native, DeSantis served in the Navy's Judge Advocate General's Corps before being appointed to be an Assistant US Attorney at the Department of Justice in 2008.

A conservative who helped found the House Freedom Caucus, DeSantis won the 2018 gubernatorial race with the help of Donald Trump, who had won the state with 49% to Clinton's 47.8%.

A loyal Trump acolyte, DeSantis acquired a national profile for his opposition to government-imposed COVID-19 restrictions such as mask-wearing and is widely considered to be a frontrunner for the Republican nomination if Trump himself decides not to run in 2024.

Democratic Primary Candidates
Nikki Fried, who announced her candidacy June 1st, is the only current Democrat elected statewide in Florida.

Born in Miami, Nikki Fried is an attorney who was elected Florida Commissioner of Agriculture in 2018. After sweeping the three-way Democratic primary with nearly 59% of the vote, Fried narrowly defeated Republican nominee Matt Caldwell by approximately 6,000 votes, or a margin of 0.08%. 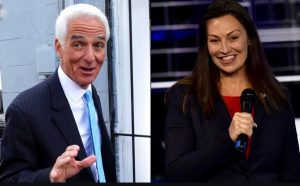 Crist and Fried are both challenging DeSantis (NBC6)

Fried previously worked as a lobbyist, forming her own firm in 2016, where she worked with clients including the Broward County School Board and the state's medical marijuana industry.

Fried will be competing against Congressman Charlie Crist (13th CD) who, prior to being elected to Congress in 2016, served as Florida's Republican governor from 2007 to 2011.

Crist, who began his legal career as general counsel for Minor League Baseball, was first elected to the State Senate in 1992, serving for six years in the legislature before waging an unsuccessful campaign in 1998 to unseat Democratic US Senator Bob Graham.

In 2000, Crist was elected Education Commissioner of Florida, and, in 2003 as the state's Attorney General, before being elected Governor in 2006, defeating Democrat Daryl Jones, 52.2% to 45.1%. In 2009, he chose to run for US Senate instead of reelection as governor. He lost the Republican primary to Marco Rubio, but decided to run as an independent in the general election, garnering 29.7% to Rubio's 48.9% and Democrat Kendrick Meek's 20.2%.

In 2012, Crist joined the Democratic Party and endorsed the reelection of President Obama. He ran for governor in 2014, but lost the general election to Republican incumbent Rick Scott by 1%. Crist ran as a Democrat for the US House in 2016, unseating Republican incumbent David Jolly by 4 points.

Miami State Senator Annette Taddeo is also said to be exploring a run.