Although the Iowa Caucus is still almost eight months way, 19 Democratic candidates flocked to the state last weekend to court the coveted support of the state's voters. 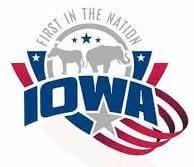 First in the Nation
Demographically Iowa does not reflect the rest of the US population. The small, rural state ranks 26th among the states in total size, 31st in population, and is over 90% white. Its status as the first presidential primary caucus state, however, places it at the top of candidates early priorities.

While a strong showing can provide momentum for a particular candidate, a poor performance can likewise signal the end to another campaign. 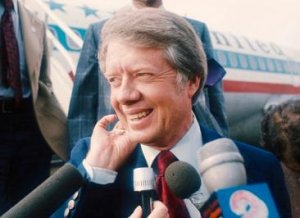 History
Prior to 1972 a presidential nominee was elected primarily through caucuses or conventions, and controlled by the party elite.

Following the 1968 Democratic National Convention, however, which was marred by racial tension, violence and clashes between rank and file voters and party leaders, the national Democratic Party decided to change their election process to make it more inclusive. This included establishing state primary dates and guidelines.

The Iowa caucus, which started in the 1840s, had traditionally fallen in the middle of campaign season. However, in order to accommodate Iowa's lengthy and complex election process, which included precinct caucuses, county conventions and district conventions, followed by the state convention, they had to start early.

In 1972, after reveling in the spotlight of being the country's first official presidential primary test, Iowans incorporated their "first in the nation" status into their state constitution. 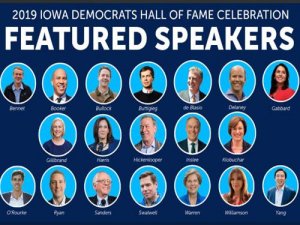 Jimmy Carter was among the first candidates to realize the importance of the Iowa caucus, investing time and advertising in the Hawkeye state.

As a little known Governor of the state of Georgia running in 1976 for the Democratic nomination for president, Carter realized a successful run in Iowa would draw national attention to his upstart campaign. His subsequent victory laid the foundation for winning the White House that November.

In the history of the Iowa caucuses, no candidate who has ever finished worse than third among the contenders has even gone on to win the nomination.

Iowa 2020
Iowa's influence in the presidential process is felt far ahead of the February 3, 2020 caucus date, as evidenced in the scramble by candidates this week -- ahead of the first official Democratic primary debate June 26th & 27th in Miami, Florida.

With a field of 24 recognized contenders, the DNC introduced new qualifications for the debate stage in February, and is limiting the number of participants to 20 over two nights. 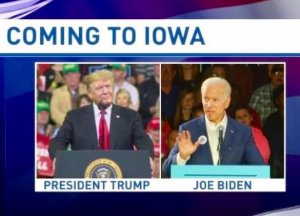 Trump and Biden, who leads the Democratic field, are both in Iowa this Tuesday (KGAN)

For the first two debates, candidates must meet a 1% polling threshold in at least three reputable national or early primary state polls in Iowa, New Hampshire, South Carolina, and/or Nevada.

A candidate may also qualify by receiving donations from 65,000 individual donors, with a minimum of 200 unique donors in at least 20 states.

In deciding the final 20 debate participants, candidates who have crossed both the polling and fundraising thresholds rank over candidates who only crossed one. To date, 13 of the 24 major contenders have met both requirements, qualifying them for the first debate.

Six additional candidates have qualified through polling alone. Qualifying candidates will be split into two groups, those polling at or above 2%, and those below, and will be randomly and evenly divided among the two nights.

The final 20 for the Miami debate are expected to be announced this Thursday.