Just three days after President Trump issued his newly revised executive order on Immigration, Hawaii filed an immediate injunction against the action -- becoming the first state to kick-off what promises to be an historic legal fight.

The new version of the Administration's controversial "Travel Ban," which will become effective March 16th,
bars citizens of Iran, Libya, Somalia, Sudan, Syria, and Yemen from entering the US for 90 days, and suspends all refugee resettlements for 120 days.

"The new executive order means that Hawaii will be unable to honor the commitments to nondiscrimination and diversity embodied in the state's Constitution, laws and policies. ... Its implementation also means that the state will be forced to tolerate a policy that disfavors one religion and violates the establishment clauses of both the federal and state constitutions."

-- Hawaii Department of the Attorney General

Hawaii's co-plaintiff is Ismail Elshikh, the imam of the Muslim Association of Hawaii.

Trump's original ban (Jan 27), "Protecting the Nation from Foreign Terrorist Entry into the United States," suspended the US refugee program for 120 days, banned Syrian refugees indefinitely and barred citizens of seven Muslim-majority countries from entering the United States for 90 days.

The ban was immediately executed, but without coordinating with government agencies and US Airlines, leaving all scrambling to adapt - while detaining travelers close to 1,000 travelers from seven countries in airports nationwide.

Following a week of protests and public outcry by major companies worldwide, Judge James Robart of the U.S. District Court for the Western District of Washington State, issued a nationwide ruling temporarily blocking both the 90-day travel ban and the 120 day hiatus in refugee admissions. 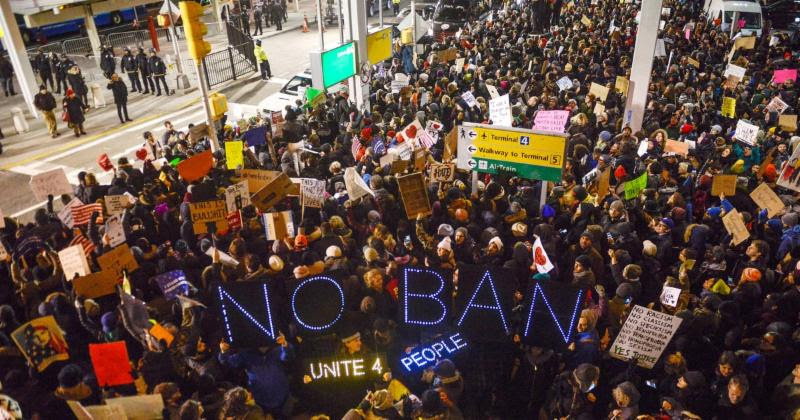 Hawaii's action on Trump's revised immigration order was quickly followed by Washington State, which filed the original challenge to the first ban.

Attorneys General from New York and Oregon have since confirmed they are planning to join the lawsuit. Minnesota is already part of the challenge to Trump's actions.

Next Steps
The suing attorneys general will take the DOJ to court again, arguing that the updated ban proposes the exact same discriminatory and harmful rules that were stricken down in the original trial in the Ninth Circuit of Court of Appeals.

TOMORROW: How the ban affects you.

DemDaily: Countdown to the Convention. Updates!

August 6, 2020 With just 11 days left until the start of the 2020 Democratic Convention, the Democratic National Convention Committee (DNCC) announced yesterday that future nominee Joe Biden will...