The second night of the first round of the Democratic presidential debate proved a very different dynamic, elevating the playing stage to direct and contentious debate between the top contenders.

In contrast to the first night, which offered a path for second tier candidates to shine, take two focused on heated exchanges between the top contenders. The top two, however, were not Joe Biden and Bernie Sanders, but the former Vice President and Senator Kamala Harris. 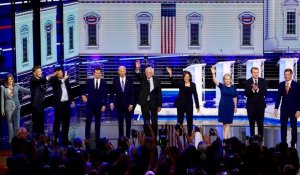 Although four of the five top polling candidates were on the stage, Biden was the target of rivals who wasted no time in attacking the frontrunner.

With only 60 seconds to answer questions and 30 seconds to respond, some of the candidates used their time to challenge Biden on his record, often with clever pre-scripted lines.

The Highlights
Eric Swalwell: "I was six years old when a presidential candidate came to the California Democratic Convention and said, 'It's time to pass the torch to a new generation of Americans.' That candidate was then-Senator Joe Biden. Joe Biden was right when he said ... (that) 32 years ago and he's still right today."

Michael Bennet, on Biden's claim that he could break partisan gridlock in Congress, "Not as long as Mitch McConnell is there ... That's why it is so important for us .. to win back the Senate as well... We need to end political gerrymandering in Washington ... we need to overturn Citizens United .. and the attack on voting rights in Shelby v Holder is something we need to deal with. All of those things happened since Vice President Biden was in Senate."

Bernie Sanders, ranked number two in polling going into the debate, went after Biden on the Iraq War, "One of the differences that Joe and I have in our record is Joe voted for the war, I helped lead the opposition to that war, which was a total disaster." 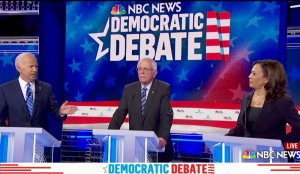 Biden and Harris in a decisive moment

Kamala Harris, however, owned the most dramatic exchange of the evening when she called Biden to task on his recent reference about working across the aisle with two former Senators who were segregationist.

As the only African-American on the stage, she made it a personal and exclusive moment, saying, "It was hurtful to hear you talk about the reputations of two United States senators who built their reputations and career on the segregation of race in this country. And it was not only that, but you also worked with them to oppose busing. And there was a little girl in California who was part of the second class to integrate her public schools and she was bused to school every day. That little girl was me."

Kirsten Gillibrand: "Imagine, we are in Florida, imagine the Parkland kids having as much power in our democracy as the Koch brothers or the NRA. Imagine their voices carrying farther and wider than anyone else because their voice is needed."

Mayor Pete Buttigieg also scored high marks for the evening. Referencing a recent racially-charged police shooting in his home city of South Bend, in which a white officer shot and killed a black man, he was asked why there are not more black police officers on the force. 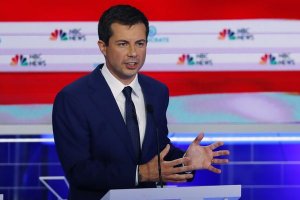 Buttigieg boldly stated, "Because I couldn't get it done... And I could walk you through all of the things we have done as a community - all of the steps that we took from bias training to deescalation. But it didn't save the life of Eric Logan. And when I look into his mother's eyes, I have to face the fact that nothing that I say will bring him back."

John Hickenlooper, on the crisis at the border, "If you had ever told me at any time in my life that this country would sanction federal agents to take children from the arms of their parents and put them in cages, actually put them up for adoption - in Colorado, we call that kidnapping." 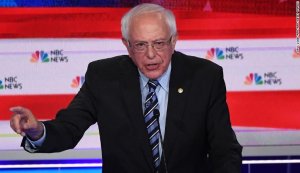 Sanders on the biggest threat to US national security, "it's Donald Trump"

Andrew Yang: "I can build a much broader coalition to beat Donald Trump. It is not left, it is not right. It is forward. And that is where I'll take the country in 2020."

The debate this week, however, was just the opening act. The next is a full month away, July 30th & 31st, when the second Presidential Primary Debate will take place in Detroit, Michigan.

April 11, 2018 Fourteen years ago Mark Zuckerberg started Facebook “out of his dorm room.”  Now 68% of U.S. adults are on Facebook. One of America’s most successful and...