Round one of the first Democratic presidential debate served its anticipated purpose of boosting, or jumpstarting, the campaigns of the second tier candidates.

Surprisingly, no mention was made of frontrunner Joe Biden, nor were there direct attacks on Elizabath Warren, the only one of the top five polling candidates to grace the stage last night. 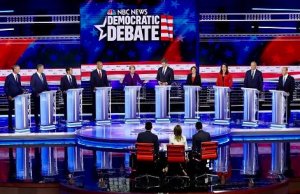 Instead, with only 60 seconds to answer questions and 30 seconds to respond to follow-ups, candidates chose to use their time in the spotlight to highlight their initiatives -- drawing only a few lively exchanges on immigration, Iran and healthcare.

The Takeaways
The most contentious moment of the night came over immigration, with Julian Castro and Beto O'Rouke, both from Texas, at the center. Advantage Castro, who garnered the most praise coming out of the night, and whose performance during the debate will likely boost his numbers.

Disadvantage O'Rouke, who also had some "deer in the headlights" moments on policy issues that drew the most negative reviews. O'Rourke was, however, the first debater to use Spanish, a move that seemed to visibly irritate Castro, the only Latino on the stage, and Cory Booker, who is also-billingual. Both followed suit shortly thereafter.

Booker, who clocked the most minutes, comes away with good marks, including as the first to pledge "to protect LGBTQ Americans every day from violence in our country."

Elizabeth Warren maintained her top tier status, speaking with strength to economic inequality, and unabashedly raising her hand when the candidates were asked whether they supported abolishing private insurance.

Bill de Blasio, the only other candidate to agree with Warren, was brash but effective in challenging O'Rourke on his opposition to medicare for all. 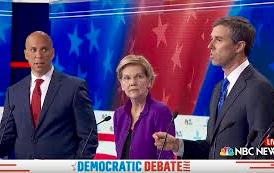 The remaining contenders were successful in introducing themselves to the public, but it is unclear if their limited limelight helped move the needle forward on their campaigns.

John Delaney was the most vocal voice of opposition to a single-payer health care system, saying "We need real solutions, not impossible promises."

Tim Ryan and Tulsi Gabbard, who topped the week's most googled candidate following the debate, verbally skirmished over American involvement in Afghanistan.

Amy Klobuchar delivered one of the better lines of the night on Iran and Trump, "I don't think we should conduct foreign policy in our bathrobe at 5 o'clock in the morning."

Jay Inslee, who held the floor for the fewest moments, also garnered big applause when, asked what was the greatest threat to the United States' security, answered "Donald Trump."

Tonight's Debate
Tonight's forum will feature a decidely different dynamic, with four of the top five polling candidates vying for a voice. All eyes, however, will be on the two contenders at center stage, Biden and Bernie.

February 18, 2019 Today is Presidents Day!  The federal holiday, officially named “Washington’s Birthday,” was established in 1885 in honor of George Washington, who was born on...