This week Wisconsin's 3rd District Court of Appeals upheld the state's Right To Work law, providing a significant legal victory to opponents in the fight for the future of organized labor.

Although federal law already makes it illegal to force an employee to join a union or to make political contributions, the last decade has witnessed an aggressive movement by conservatives to pass Right to Work legislation, or similar constitutional amendments, in individual states.

The Wisconsin legislation, signed into law by GOP Governor Scott Walker in 2015, prohibits "security clauses" in union-management contracts that ensure payment from all workers, including non-members. Unions argued they are owed the fees because all employees benefit from the labor group's collective bargaining. 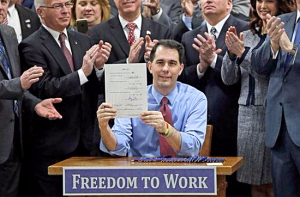 The court, however, ruled "The unions may be required to expend resources to represent employees in a bargaining unit who do not pay fees or dues to the unions, but this result does not constitute a taking."

Tuesday's decision overturned a 2016, lower-court ruling that found the Wisconson law violated the state constitution. The Wisconsin AFL-CIO, the International Associations of Machinists and the United Steelworkers of America, who filed the law suit, also lost a similar July federal suit that was rejected by the 7th US Circuit Court of Appeals in Chicago.

The Battle
The increasing state-based attacks on labor by groups like American Legislative Exchange Council (ALEC) and the National Right to Work Committee, are aimed at weakening an already declining union workforce by depleting their financial base, bargaining power and ability to organize. 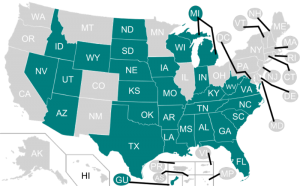 Kentucky and Missouri passed Right to Work laws earlier this year (although Missouri's is being challenged in a voter referendum on the 2018 ballot).

The two bring the total to 28 Right To Work states. 26 of those states voted to put Trump into office.

2018 is expected to bring more state battles in Colorado, Ohio, Oregon, Pennsylvania and New Hampshire, among others.

October 2, 2019 Two years ago I woke up at 4:00am to hear National Public Radio report about a mass shooting in Las Vegas that had killed over a dozen people. By the end of the day that number was...