President Trump has announced his nominee for new Chair of the Federal Reserve, the central banking system of the United States.

Trump's nominee, Jerome Powell, will replace current Fed Chair Janet Yellen, whose four-year term is up in February. This will be the first time a Fed Chair has not served two terms since 1979.

Although Trump heaped praise on Yellen today during today's announcement, the unspoken understanding is that because Yellen was appointed by Obama, she is out in favor of Powell -- a Republican and current member of the Federal Reserve's Board of Directors. 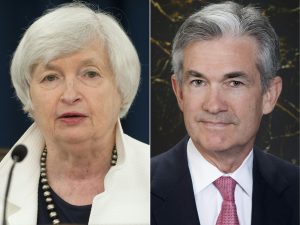 Jerome Powell
- Member of the Board of Governors of the Fed
from 2012 to present
- Partner at The Carlyle Group, a private equity
firm, 1997-2005
- Asst Secretary and Undersecretary of the Treasury
under President George HW Bush 1990-1993
- Undergraduate degree from Princeton and JD from
Georgetown.
- Will be the first Fed Chair not to have an
economics degree

History
The Federal Reserve System (also known as the Fed) was created on December 23, 1913, under the Federal Reserve Act, after a series of financial "panics" or crises, beginning in 1907, led to the desire for central control of the monetary system. Later the Great Depression (1930's) and the Great Recession (2000's), led to the expansion of the roles and responsibilities of the "Fed." 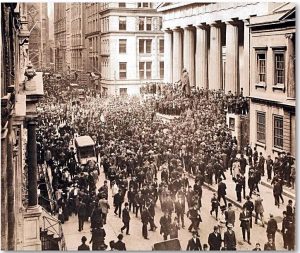 Wall Street, NYC. The Banking Panic of 1907 spurred creation of the Federal Reserve

Function
-  To address the problem of banking panics
-  To serve as the central bank for the United States
-  To strike a balance between private interests of banks and the centralized responsibility of government
- To supervise and regulate banking institutions
- To protect the credit rights of consumers
-  To manage the nation's money supply through monetary policy  to achieve the goals of
- maximum employment
- stable prices, prevention of inflation or deflation
- moderate long-term interest rates
-  To maintain the stability of the financial system and contain systemic risk in financial markets
-  To provide financial services to depository institutions, the US government, and foreign official
institutions, including playing a major role in operating the nation's payments system
-  To facilitate the exchange of payments among regions
-  To respond to local liquidity needs
-   To strengthen US standing in the world economy 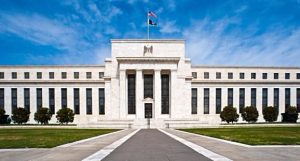 The Eccles Building (built 1937) at 20th & Constitution Avenue, NW is home to the FRB and staff

The Fed also conducts economic research and provides numerous publications, including the Beige Book and the FRED database.

The US Department of the Treasury, an entity outside of the central bank, prints our currency.

Although Powell's appointment will, no doubt, draw criticism as a strictly political move, he is still considered a "safe" choice, a centrist and pragmatist, who sees eye-to-eye with Yellin on monetary policy and operation of the Federal Reserve.

Powell's appointment must be confirmed by the US Senate, which is expected to approve his nomination.