Among the numerous legal cases involving President Trump, three lesser known suits concern the President's violation of the "Emoluments Clause" of the US Constitution, which prohibits acceptance of foreign governments' payments to his businesses.

The lawsuits against Mr. Trump were filed separately in federal court by 1) the State of Maryland and the District of Columbia 2) by Democratic Members of Congress and 3) Citizens for Responsibility and Ethics in Washington (on appeal).

The legal cases, however, do not involve the Special Counsel's ongoing Trump-Russia collusion investigation, but foreign governments' payments to the Trump Organization. 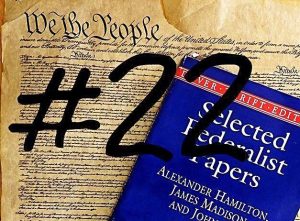 "One of the weak sides of republics, among their numerous advantages, is that they afford too easy an inlet to foreign corruption."  -- Alexander Hamilton

Following the 2016 election, Trump turned over control of his global real estate and marketing empire to his two sons, but did not divest himself from it.  This means he continues to benefit financially from the organization's profits, including those from foreign governments.

For over four decades Presidents of both parties, to avoid conflict of interest, have sold off their corporate assets and placed them in a government-approved blind trust.

Trump's refusal to do so was criticized by US Office of Government Ethics Director Walter Shaub, who called for ethics investigations.  Shaub subsequently resigned from the non-partisan position six months into the Trump administration, saying, "the White House ... has set a tone from the top that ethics doesn't matter."

At the time the Associated Press reported that, "Since (Trump has) become president, the Trump Organization has secured dozens of potentially valuable patents, including in China, and collected fees from lobbyists working for Saudi Arabia and other countries using his properties."

The full scope of foreign payments to the organization is unknown since the President still has yet to make public his tax returns.

Protection of the "republican character of the United States" against corruptive influences is also addressed in Article II, Section 1, Clause 7, the Domestic Emoluments Clause, or "the Presidential Emoluments Clause," which prohibits the President from accepting any emolument, other than his fixed salary (currently $400,000) "from either the federal or any state government." 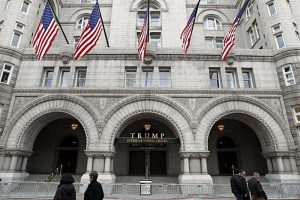 Payments to the Trump Hotel in Washington, DC are at issue in lawsuits against the President

The lawsuits are the first of their kind, as there has been no precedent or challenge as to how the emolument clause(s) applies to the President.