A report released this week reveals how the political parties, and most particularly Democrats, have missed "the biggest electoral earthquake of the last decade" in discounting the significance of a key demographic -- manufacturing-heavy, working-class towns.

The study, produced by American Family Voices and 21st Century Democrats, debunks, in-depth, the conventional premise that there are only three kinds of political turf that matter: the big cities, which are Democratic; rural America, which is Republican; and the suburbs, which is where most of the swing voters are, and therefore where the parties should spend most of their time.

That approach neglects a newly defined, yet long overlooked subset of the American electorate: the Factory Towns. They are the manufacturing-heavy, working-class towns that are not part of huge urban areas, but are not farming-dominated rural counties either.

The Factory Towns Report looks at 853 counties in 10 different Midwest and Great Lakes states, which have lost 1.3 million manufacturing jobs since the beginning of this century -- a decline that has been most damaging to Democrats. 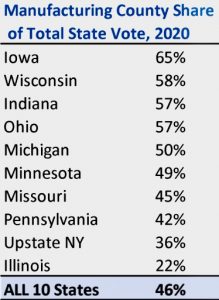 “Factory Town” counties can be split into two types: 1) midsized ones with cities more than 35,000 in population that are not attached to the big urban areas, and 2) smaller ones that are just as reliant on manufacturing, but do not have any cities with at least 35,000 people. These counties contain 40% of voters.

The focal states are Pennsylvania, Ohio, Michigan, Indiana, Illinois, Wisconsin, Iowa, Minnesota, Missouri, and upstate New York. They are in the traditional industrial heartland: eight states in the Midwest (six longtime presidential battleground states along with heavily Democratic Illinois and heavily Republican Indiana), plus Pennsylvania, along with 48 counties in upstate New York -- the part of the country most impacted by deindustrialization.

These areas swung heavily to Obama in 2008, not quite so decisively in 2012, and then went enough toward Trump to give him his electoral college victory in 2016.

In 2020, Democratic gains in large metropolitan areas nationally offset their losses in rural areas. The 82-page Factory Towns report, however, explicitly links Democratic decline in certain sectors of the population that elected Trump in 2016, "to the sort of deindustrialization that has weakened liberal parties around the world," said the New York Times' Jonathan Martin, who published an exclusive on the report Tuesday.

“If things continue to get worse for us in small and midsize, working-class counties, we can give up any hope of winning the battleground states of the industrial heartland,” -- Richard Martin, who co-authored the report with fellow Democratic strategists Mike Lux and David Whilhelm

* The Democratic vote losses in small to midsize "factory town" counties from 2012 to 2020 exceeded, by a 2:1 margin, the gains Democrats made in big cities and big city suburbs. Counting additional losses in rural counties with little manufacturing base, Democrats lost almost two million in vote margin in the 10 report states.

* The share of the Democratic presidential vote in the Midwest declined most precipitously between 2012 and 2020 in counties that experienced the steepest losses in manufacturing and union jobs and saw declines in health care.

* In the factory town counties in those states, where support for the Republican presidential nominee grew between 2012 and 2020, the losses were acute: More than 70% suffered declines in manufacturing jobs. The higher the percentage of manufacturing jobs lost, the greater the vote shift to the GOP.

Among the most striking of the report's findings was the decline in union membership across the region.

Nine of the 10 states included in the report accounted for 93% of the loss of union members nationwide in the last two decades. Only Minnesota saw a net gain in union membership from 2010 to 2020.

In the last ten years, as the GOP has made gains in control of state legislatures, these states have lost 10% of their union membership -- three times greater than the US average.

The Labor movement has traditionally been a strong partner of the Democratic Party, both in terms of voting and financial support. As noted in the report, when union membership declines significantly, it impacts not only politics and elections, but workers, wages, benefits, and community well-being.

"This report shines a light on a huge political problem for Democrats, who have misjudged and failed to understand the needs of millions of voters. As we approach the 2022 midterm elections and beyond, it is critical that we learn how to reach, and talk to, these working-class towns and manufacturing-heavy regions. Whether it is the race for the White House, or a down ballot or local city council race, Democrats must remain competitive in these counties, and think differently about how to stay viable in each community." - John Pouland, 21st Century Democrats

NOTE: The Democratic National Committee (DNC) will be holding its Fall Meeting virtually this Saturday, October 9th, starting at 11:00am. You can tune into the General Session HERE

Check Out The Agenda Here