DemList is at the Democratic National Committee's Winter Meeting in Washington, DC, and will continue to update you daily on developments with the party and the players through its final meeting Saturday.

Faces of the Party

The event kicked off with last night's IWillVote Gala, providing Democratic officials from every state, elected officers and supporters the opportunity to meet for the first time since the historic November midterms, and celebrate the success of electing new Democratic lawmakers across the country. 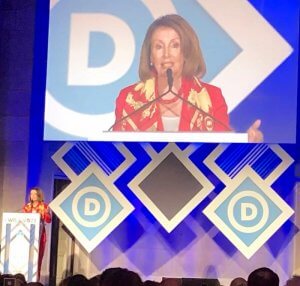 The packed room of 500+ donors, DNC members and political players at the Mellon Auditorium was treated to rousing speeches from the party's leadership -- all too happy to tout the blue wave of new Democratic lawmakers and their take over of the US House of Representatives.

The event also celebrated the success of the DNC's IWillVoteprogram, launched in 2018, as an online and on-the-ground organizing initiative to commit 50 million Democratic voters.

Technology has stepped up considerably under DNC Chair Tom Perez, who yesterday announced a new campaign data initiative by the DNC and the Association of State Democratic Committees.

Perez, Senator Chris Van Hollen and House Speaker Nancy Pelosi all delivered enthusiastic and powerful tributes to the people of the party, and those in the room who helped Democrats flip 40 congressional districts, seven gubernatorial seats and eight legislative majorities. 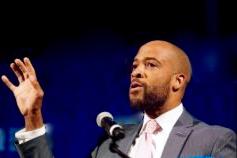 In addition to the soulful, orchestral sound of the String Queens, highlights included speeches by freshman Congresswoman Deb Haaland, who is one of the first two Native American women elected to Congress, and newly-elected Mandela Barnes, the first African American Lieutenant Governor in Wisconsin's history.

Noticably absent were Presidential candidates, who filled the line up at last year's gala. DNC members have since voted to eliminate their vote on the first ballot of the presidential nominating process. Historically, DNC members were "superdelegates" who each cast their own vote for a nominee candidate. 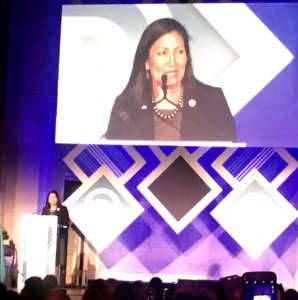 Through Saturday DNC members from every state and Democrats Abroad are convening at the Marriott Marquis in DC to participate in caucus, council, and committee meetings.

Of the many issues on the agenda, the government shutdown loomed large in anticipation of the Senate vote on the funding bill -- taking place less than a mile away in the US Capitol.

As DNC Members wrapped up their meetings, the Senate voted to pass the funding bill, without the border wall funding demanded by the President. The House is expected to approve the bill later tonight

While it may prevent the government from shutting down, it will not stop the President from declaring a national emergency to secure funding for his wall.

The bill was also signed without back pay for government contractors and without reauthorization of the Violence Against Women Act.  Clearly Democrats still have a great deal of work to do.