As President Trump delivered his second State of the Union (SOTU) address Tuesday night, there were dosens of additional guests in the Gallery of the US House of Representatives, representing the faces and the impact of Trump's policies on the American people.

In his first SOTU since the Democrats took the House in November, Trump kept it to a tightly scripted speech, touting the purported accomplishments of his administration, Trump cited "a revolution in American energy," and "a thriving economy" that has most benefited women, "who have filled 58% of the newly created jobs last year." 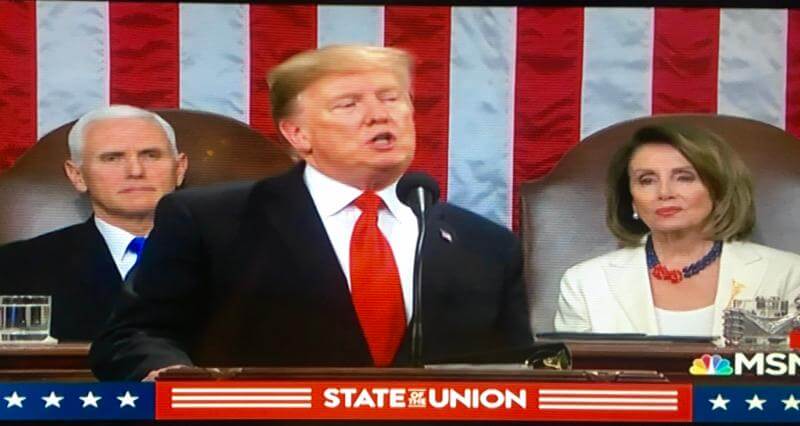 He did, however, announce another summit with North Korean leader Kim Jong Un.

Although Trump called for unity, he was ultimately unflinching on the Wall: "I will get it built."

Among the Presidents most memorable quotes, viewed as a threat by many: "An economic miracle is taking place in the United States and the only thing that can stop it are foolish wars, politics, or ridciulous, partisan investigations."

Throughout the speech, Trump acknowledged Special Guests of the White House, a dozen individuals selected to represent the issues facing the nation and his administration's accomplishments and agenda. 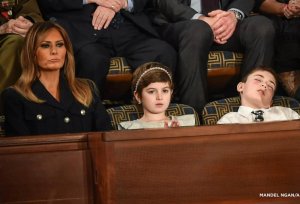 First Lady Melania Trump with special guests Grace Eline and Joshua Trump (no relation), who has been hailed as a "resistance" hero for falling asleep.

Sixth grader Joshua Trump, bullied because he shares the President's last name, and who is part of First Lady Melania Trump's anti-bullying "Be Best" campaign, stole the show. As did last minute addition, former Astronaut and Apollo 11 crew member Buzz Aldrin, whom Trump acknowledged when noting the 50th anniversary of the lunar mission this year.

Members of Congress, each allowed to bring one guest themselves, filled seats with constituents who were victims of Trump's policies.

Before an historically diverse, and fired up, 116th Congress, including a dozen potential presidential opponents (of both parties), the President spoke for 81 minutes. 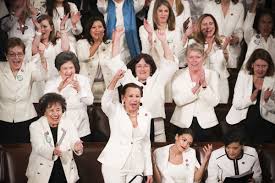 Democratic women, dressed in suffrage and solidarity white, applaud Trump's odd nod to "the most women in Congress" (since only 21 of the 127 are Republican)

Amidst the sea of dark suits and female Democratic members in suffrage white, were more than a hundred sets of additional eyes -- from a Costa Rican immigrant who worked as an undocumented housekeeper for Trump, to gun tragedy survivors and women's health and rights advocates, to labor leaders and future movement leaders.

Among the guests were those invited by four Senators, all presidential candidates.

Edward Douglas
Guest of Senator Cory Booker (NJ).  Edward Douglas, a former federal inmate from Chicago, who became eligible for release from prison in January after Trump passed the First Step Act, was sentenced to life in prison in 2003 for selling 140 grams of crack cocaine. Booker is bringing Douglas to highlight his commitment to criminal justice reform. 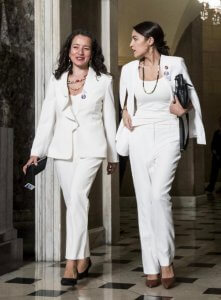 Sajid Shahriar
Guest of Senator Elizabeth Warren (MA).  Shahriar, a U.S. Department of Housing and Urban Development employee was furloughed during the 35-day government shutdown.
Shahriar, also Vice President of AFGE Local 3258, missed paychecks during the shutdown and organized with fellow federal workers to push for the government to re-open.

Opposition Response
In a passionate and decisive speech, Stacey Abrams delivered the official Democratic response to the SOTU. 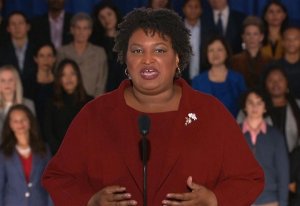 Abrams, who was unsuccessful in her campaign for the 2018 Georgia Governor's seat, is a rising star and an inspiring symbol of grit.

Abrams condemned the divisive politics of the White House and the government shutdown, calling it "A stunt, engineered by the President of the United States."

Striking on a number of themes, she criticized the Republican Tax Bill for its unfairness to working people, and called for compassionate treatment at the borders, saying "Democrats stand ready to effectively secure out ports and borders, but ..."

In a final tone of bipartisanship, however, Abrams called for Americans to "come together and stand for, and with, one another." While "disappointed" with Trump's approach to governing, she said, "I still don't want him to fail ... But we need him to tell the truth."

The factcheckers are still busy.

April 6, 2018 Tuesday’s State Supreme Court election in Wisconsin delivered a significant win for Democrats in a state where they have been under seige in the courts and in the legislature...