Facebook, the world's largest social media platform used by over 68% of US adults age 18+, has been a key, if unintended, player in the Russia-Trump campaign interference investigation.

The popular social media network founded by internet entrepreneur Mark Zuckerberg in 2004, has been under fire since it was discovered that 87 million of Facebook users' data ended up in the hands of Cambridge Analytica -- the digital company that served as consultants to the Trump campaign, and which masterminded the Russian data-sharing scheme.

The breach of privacy, reported in March, led to Zuckerberg's command performance before Congress one month ago, where the 33 year-old was grilled by lawmakers for two days.

In a time when the world is still navigating both the legalities and the privacy of internet security, however, the hearings proved to stimilate more questions than answers about the larger picture of regulation and accountability. 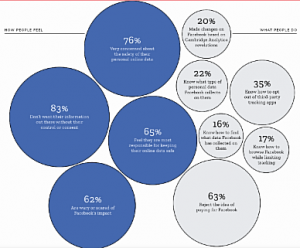 The Takeaways
*  83% say they don't want their information out there without their control or consent.
*  76% say they are very concerned about the safety of their personal information online, although only 20% reported making changes to protect their privacy.
*  65% see themselves - rather than companies or the government - as being responsible for protecting their personal information online.
*  63% rejected the idea of paying for Facebook.
*  Although Mozilla's survey showed 62% are wary or scared of facebook's impact, a separate survey by Tech.pinions shows only 9% of Facebook users have deleted their accounts since the scandal broke.

The Mozilla survey results came just days before today's publication by Democrats on the House Intelligence Committee of more than 3,500 Facebook and Instagram ads by the Russian propaganda group, the Internet Research Agency.

The ads targeted users based on geography, age, gender and other demographics to influence the 2016 presidential campaign.   Facebook reported that 3.7 million people clicked on the ads or "fake news" and they were ultimately viewed by 33 million.

To prevent bad actors from undermining the democratic process in the future, Facebook released an updated list of changes to their platform and practices, including new advertising vetting, requiring political and issue ads to state who paid for them, and an increase from 10,000 to 20,000 people working on internet security.

Yet to be determined is how the Russia campaign interference campaign will affect our lives, and the internet, but what is apparent is that - at least for now - Facebook is here to stay.