Over the next two days Facebook CEO Mark Zuckerberg will appear before Congress to answer questions about his company's use and protection of user data.

The bipartisan call to testify was prompted by Facebook's role in the Russia-Trump campaign interference investigation, and how 87 million users' data ended up in the hands of Cambridge Analytica, the company that masterminded the data-sharing scheme.

In anticipation of our wrap up tomorrow on the highlights of the hearings, here is a little background on the world's largest social media platform --

Launched:   February 4, 2004.  Initially limited to Harvard students, it expanded to other universities, then high schools. As of 2006, anyone age 13+ years old may open a facebook page.

Initial Public Offering (IPO):  February, 2012.  The company, @share price US $38, was valued at $104 billion - the largest valuation to date for a newly listed public company.

The Social Network, the 2010, fictional movie about the start of Facebook, won 3 Oscars and 4 Golden Globes 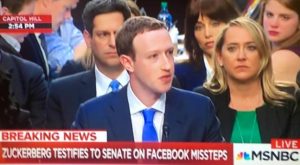 How It Works
Pages:  Once registered, users can create a customized profile and page on facebook with their name, occupation, contact info, education, interests, relationship status and other categories. You can also create a Facebook page for your business, place, company, organisation, brand, product or fans!

Friends: Users can add or "connect" other users to your page as "friends", exchange messages, post status updates, share photos, videos and links, use various software applications (apps), and receive notifications of other users' activity.

Advertising:  93% of marketers use Facebook advertising regularly, which translates to about 3 million businesses - 70% of which are outside the US.