In following on our rundown on vulnerable House Republicans, a look at the most competitive Democratic seats in the 2018 battle for control of the House. 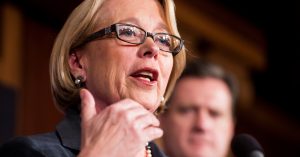 Niki Tsongas (MA-3) is thesole Democratic retirement to-date. Seven other Dems are leaving the House to run for higher office

Of the 435 Congressional seats up in 2018, the Cook Political Report rates 175 as solid Democrat and 186 as solid Republican. That leaves 74 seats in play: currently held by 19 Democratsand 46 Republicans.

While the ongoing Trump controversies, GOP departures (8 retirements/8 running for higher office) and the recent Democratic fundraising performance may have shifted the numbers in Dem's favor, much - as we know - can still happen in the next year leading up to the November, 2018 elections.

In addition, Cook and other pundits universally rate Florida's 27th Congressional District, where Republican Ileana Ros-Lehtinen is retiring, as a Lean or Likely Democratic takeover.