Yesterday the 538 members of the Electoral College certified the results of 2020 presidential election, affirming Joe Biden and Kamala Harris as the 46th President and Vice President of the United States.

A record 81 million votes were cast for Biden and Harris.

In the traditionally procedural vote of electors in all 50 state capitols and DC, the official count was 306 electoral votes for Joe Biden to 232 for Donald Trump -- the same "landslide" margin Trump bragged of when he won the White House in 2016.

Addressing the nation last night, President-elect Joe Biden condemned the "unconscionable" actions and attacks on the vote by Republicans and President Trump, who has yet to concede the election.

In a sign that the transition is truly underway, the Biden Presidential Inaugural Committee (PIC), announced new details today surrounding the January 20, 2021 inauguration ceremonies at the U.S. Capitol, when President-elect Biden and Vice-President-elect Harris will take their oaths of office.

In the release, PIC CEO Tony Allen said, while the goal is to honor "the grand traditions of the Presidency," creating an inauguration that keeps people safe is a priority, and "the ceremony's footprint will be extremely limited, and the parade that follows will be reimagined."

Former FDA commissioner and Biden advisor Dr. David Kessler, who was announced as PIC's Chief Medical Advisor today, said, "We are asking Americans to participate in inaugural events from home to protect themselves, their families, friends, and communities."

Although the inauguration will not be the grand celebration of in-person balls and parties, there will still be "an innovative program" of virtual activities and events, much like last Summer's Democratic National Convention, the first virtual national event of its kind, held amid an historic pandemic.

PIC has hired "seasoned production experts" to work on the program, including Stephanie Cutter and Ricky Kirshner as Executive Producers, who worked on the critically-acclaimed Democratic Convention, and Rod O'Connor is joining as Senior Advisor. 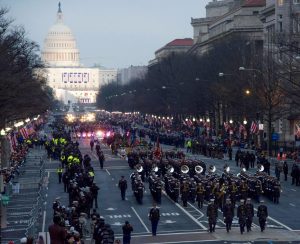 The 59th Inauguration presidential parade will be "reimagined" (Stephen Hassay)

PIC, which is working closely with the Joint Congressional Committee on Inaugural Ceremonies (JCCIC), a non-partisan committee responsible for planning of the inauguration ceremony itself, is expected to announce more details by the end of the week.

In the interim, it is still unclear whether President Trump will participate in the ceremonies, which traditionally would start with a tea between the President-elect and the outgoing President before the two ride together from the White House to the Capitol for the inaugural ceremonies.

There is ongoing speculation that Trump, instead, plans to hold a made-for-TV, campaign-style rally in Florida the day of inauguration to announce his 2024 bid for the White House.