Voters in five states went to the polls Tuesday. Primaries took place in DC and Virginia, and runoff elections were held in Alabama and Georgia, as well as in Arkansas for several legislative seats. 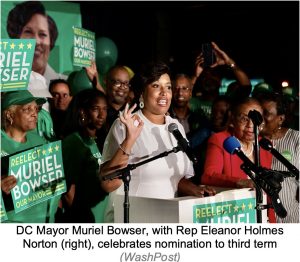 WASHINGTON, DC
The District of Columbia (DC) does not have statehood status, and therefore has no representation in the US Senate and just one non-voting Delegate in the US House.

With 86.8% of the vote, that delegate, Congresswoman Eleanor Holmes Norton, easily won renomination to a 16th term Tuesday. She will face Republican Nelson Rimensnyder in November. In the deeply blue city, however, the June Democratic primary generally determines the winners of the general election.

The marquee race in the nation's Capital is the Mayoral race, where incumbent Muriel Bowser is headed to a third term. Bowser secured 50% of the vote, fending off challengers Robert White (38.6%), Trayon White (9.8%) and James Butler (1.5%).

If successful, as anticipated, against Republican Stacia Hall in November, Bowser will become only the second mayor in Washington’s history to serve three consecutive terms. The first was "Mayor for Life" Marion Barry, who presided over the city continuously from 1979 to 1991 (and again, from 1995 to 1999). 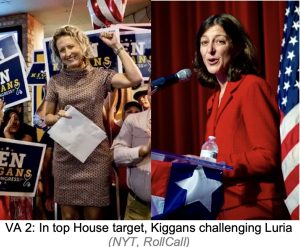 In the open seat for Attorney General, Brian Schwalb, with 45.6%, won the Democratic primary to succeed two-term incumbent Karl A. Racine (D). Bruce Spiva secured 35.9%, followed by Ryan Jones with 18.5%.

VIRGINIA
Virginia Democrats, who are still reeling from the loss of the Governor's mansion last November, are defending two targeted congressional seats.

Luria, who won reelection to the Virginia Beach-based seat with 51% in 2020 and is a member of the House January 6th Committee, now faces a slightly more Republican constituency (R+6) after redistricting. 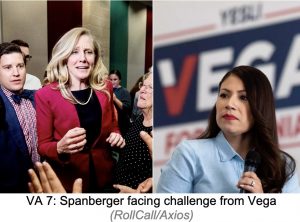 Yega, a sheriff’s deputy who was head of Latinos for Youngkin last year, secured 28.9% of the vote, followed by veteran Derrick Anderson with 23.8%, State Senator Bryce Reeves at 20.1% and Crystal Vanuch at 17%.

The newly redistricted Seventh CD, which stretches across Northern Virginia, is now slightly more Democratic (D+2), giving Spanberger, who won her 2020 reelection by less than 2%, a needed boost.

In the Eighth Congressional District, rooted in the DC suburbs, four-term Congressman Don Beyer handily defeated progressive primary challenger Victoria Virasingh, 77.4% to 22.6%. Although Beyer is expected to easily fend off Republican challenger Karina Lipsman in the heavily blue district, the former Ambassador and Lieutenant Governor had never before faced a primary opponent.

Congresswoman Jennifer Wexton, who won reelection to the suburban 10th Congressional District with 56.6% in 2020, is also a GOP target. Wexton will face Republican retired Navy Captain Hung Cao in the likely Democratic seat. 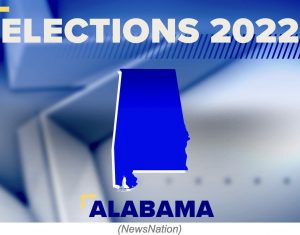 Although Trump provided an early endorsement to Brooks, a close ally, the former president withdrew his support in March as polls showed Brooks losing ground. Trump endorsed Britt after the May 24th primary. Britt will face Democratic nominee pastor Will Boyd in the general.

GEORGIA
Coming out of the May 24 primary election, four statewide races, and four congressionals went to a runoff. 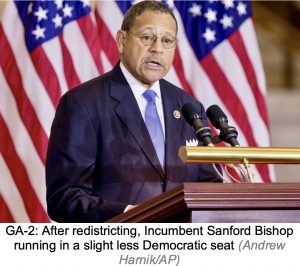 In the Republican primary runoff in the Second Congressional District, attorney Chris West defeated army veteran Jeremy Hunt 51.3% to 48.7% to take on Democratic Congressman Sanford Bishop who has represented the southwest seat since 1993. 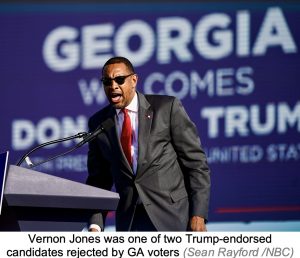 In eastern 10th Congressional District is open, vacated by four-term Congressman and Trump ally Jody Hice, who made a failed bid to unseat incumbent Secretary of State Brad Raffensperger in the May 24 primary.