This week FEC Vice Chair Matthew Peterson resigned, rendering the Federal Elections Commission powerless without a four-person quorum to conduct business for the first time in over a decade.

Background
The FEC's governing body is composed of six Commissioners who are appointed to six-year terms by the President and confirmed by the Senate. By law, no more than three of the commissioners can belong to the same political party. 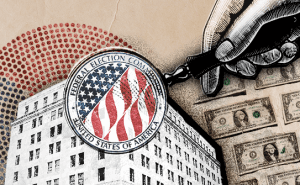 The chairmanship of the commission rotates among the members each year, with no member serving as chairman more than once during a six-year term.

Peterson, a Republican appointed by George W. Bush, provided no reason for his resignation, which is effective August 31st. Peterson was expected to leave in 2016 when he was nominated by Trump to the federal judiciary, but withdrew after an inability to show legal expertise during his confirmation before the Senate.

His resignation leaves three commission members: Chair Ellen Weintraub, a Democrat, Caroline Hunter, a Republican, and Steven Walther, an Independent. All are continuing to serve beyond expired terms.

The other two positions were held by Republican Lee Goodman, who resigned in February of 2018, and Democrat Ann Ravel, who resigned in March of 2017. No replacements have been appointed under the Trump administration.

Conveniently, the lack of quorum will prevent the FEC from issuing formal guidance to campaigns and enforcing campaign finance laws as we go into the 2020 presidential election. 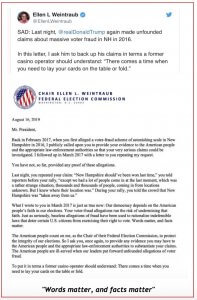 The Controversy
There have long been calls for reform of elections, and their governing commission, amidst a drastically changing legal and technical election environment.

Since the 2010 Supreme Court Citizens United ruling that opened the flood gates on outside groups and campaign spending, the FEC has struggled to keep up with election enforcement and necessary reforms.

Under the Trump administration, however, the FEC has been under fire as a dysfunctional forum, reduced to ineffectiveness by a Republican-dominated commission that argues excessive enforcement of elections laws infringe on the First Amendment right to free speech.

Top Election Cop
This has not, however, deterred FEC Chair Ellen Weintraub (D), first appointed by George W. Bush, from calling out President Trump on what are normally legally accountable actions.

Trump, who has espoused that voter-fraud took place in New Hampshire and other states since he was elected, has provided no shortage of material.

Two months into Trump's term, Weintraub issued a formal public statement demanding that the President present evidence supporting his claim that voter fraud prevented him from winning New Hampshire in 2016.

Two weeks ago, following renewed public claims by Trump of election-rigging in New Hampshire, Weintraub issued another letter to Trump calling for evidence.

In June of this year, Weintraub issued a public warning to Trump the day after an ABC news interview in which he stated, "I think I'd take" information offered by a foreign government on an opponent. Trump added he would be under no obligation to go to authorities, despite FBI Christopher Wray's recent testimony to the contrary. 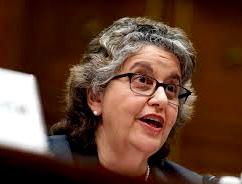 In response, Weintraub posted, "It is illegal for any person to solicit, accept or receive anything of value from a foreign national in connection with a U.S. election" and those who do risk "being on the wrong end of a federal investigation."

This month Weintraub went public when commission Republicans blocked her from sending a letter of formal request to the FBI on their criminal investigation into the NRA and Russian money laundering for Trump.

After Peterson's resignation Monday, Weintraub tweeted, "Make no mistake: Despite FEC Vice Chairman Matt Petersen's resignation, the FEC will still be able to shine a strong spotlight on the finances of the 2020 campaign. I urge the President to nominate new Commissioners immediately and for the Senate to confirm them quickly."

There are FEC and election reforms incorporated into HR 1, the For the People Act, which passed the House of Representatives in March, and has been introduced in the Senate.

Neither its passage, nor new FEC appointees, are expected anytime soon.

The State of the Republican Race: Indiana has no notable footmarks in the history of presidential elections, but that changed yesterday.