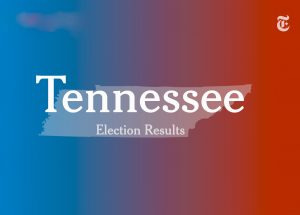 On the heels of Democrats' big win with the "No" abortion ban vote in Kansas, voters in ruby-red Tennessee cast their ballots for their general election nominees.

Governor: Republican Governor Bill Lee, who was unopposed in the primary, will face Nashville physician Jason Martin in November.

TN-05: All eyes were on the newly redistricted 5th CD, one of three seats favoring the GOP that were carved out of the former Nashville-based seat held by 16-term Democratic Congressman Jim Cooper, who is retiring.

The district includes parts of Davidson, Williamson and Wilson counties and all of Lewis, Marshall and Maury counties.

Democratic nominee and Nashville State Senator Heidi Campbell will take on Maury County Mayor Andy Ogles, who prevailed in the GOP primary with 36.9%. Former Tennessee House Speaker Beth Harwell placed second with 26%, followed by retired Brigadier General and businessman Kurt Winstead, and six other candidates who came in under 8%.

While the new district leans strongly toward the GOP, the election of Ogles, an anti-abortion, ultraconservative provides some hope for Democrats. 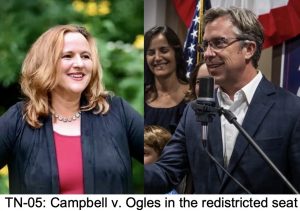 "Senator Heidi Campbell is a strong, popular candidate, elected in a state senate seat that falls within the new fifth congressional district. She can make this a competitive race." said former State Senator William Owen.

Update on Arizona: The GOP nomination for governor has been called for Trump-endorsed former Fox news anchor Kari Lake, who bested establishment favorite Karrin Taylor Robson, 46.8% to 44%. She will take on Democratic nominee and current Secretary of State Katie Hobbs.