In the last group of primaries prior to Election Day, voters in New Hampshire, Delaware, and Rhode Island went to the polls on Tuesday. 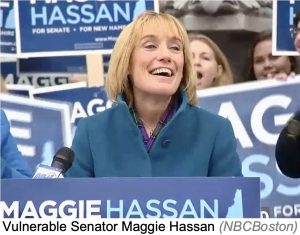 Bolduc, who was a candidate for the US Senate in 2020 and is a pro-Trump election denier, secured 37.1% of the vote. He was followed by State Senator Chuck Morse with 35.8%, former State Presentative Kevin Smith with 11.7%, and the remaining candidates under 8%.

Hassan, who served as Governor from 2013 to 2017, is only the second woman in American history to be elected both Governor and United States Senator, along with fellow New Hampshire Senator Jeanne Shaheen. She unseated first-term Republican Senator Kelly Ayotte in 2016 by less than 800 votes. 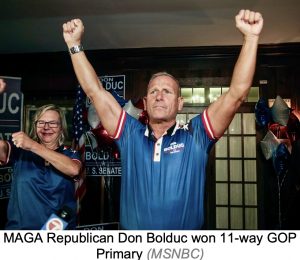 The most recent pre-primary poll, conducted June 22-July 8 by Data for Progress, showed Hassan leading Bolduc 49% to 44% among likely voters.

Morse outraised Bolduc almost three-to-one in the primary, and a GOP super PAC invested over $4 million in ads to boost his candidacy. Outside Democratic groups, however, spent more than $3.2 million to teardown Morse in hopes of tipping the scales toward the more extreme Bolduc who would be less competitive against Hassan in the general election.

Sununu, a popular GOP governor in a state Biden won, was first elected by the independent-minded voters of "The Granite State" in 2016 and was last reelected in 2020 by 18%. New Hampshire governors serve just two-year terms.

State Senator and physician Tom Sherman was unopposed for the Democratic nomination.

Leavitt, who just turned 25, is the second "Gen-Z" candidate to win a primary. 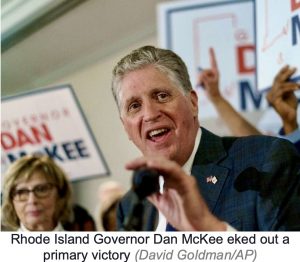 McKee is heavily favored against businesswoman Ashley Kalus, who won the GOP nomination with 83.6%.

CD 2: In the open 2nd District being vacated by retiring Congressman James Langevin (D), State Treasurer Seth Magaziner won the Democratic nomination with 54% of the vote. In the tossup contest, he will face former Cranston mayor and two-time Republican gubernatorial candidate Allan Fung, who ran unopposed in the GOP primary. 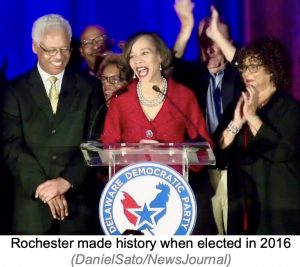 Rochester, who was a co-chair of Briden's presidential campaign, is the first woman and first African American to represent "The First State" in Congress. The race is a rematch of the 2020 contest, which Rochester won with 57.6% of the vote to Murphy's 40.2%.