In beautifully blue Massachusetts, Democrats are poised to retake the governor's mansion and elect a historic slate of women to statewide office. 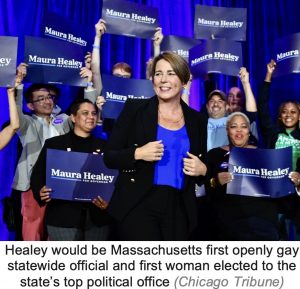 Diehl, who was endorsed by former President Donald Trump, defeated more moderate businessman Chris Doughty, 55.5% to 44.5%, for the GOP nomination.

In 2018, Diehl unsuccessfully challenged incumbent Democratic US Senator Elizabeth Warren, receiving just 36% of the vote in the general election. Healy is heavily favored to flip the seat.

Attorney General
In the premier contest of the day, former Boston City Councilor Andrea Campbell defeated labor lawyer Shannon Liss-Riordan 50.3% to 34%. Assistant Attorney General Quentin Palfrey, who was still on the ballot after dropping out August 30 and endorsing Campbell, secured 15.7%. 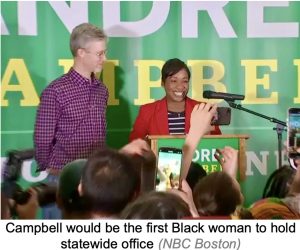 Secretary of State: Seven-term incumbent Bill Galvin fended off a challenge by NAACP Boston head Tanisha Sullivan, 70.1% to 29.9%. Galvin will be challenged by insurance manager Rayla Campbell, who was unopposed in the GOP primary.

State Treasurer: Two-term incumbent Democrat Deb Goldberg had no primary opponents and is unopposed in the general election.

US House
None of the Bay State’s nine incumbent Democratic US House members faced primary challengers. All are expected to win reelection in November.

November 6, 2019 Now one year away from the 2020 presidential election, voters delivered critical statewide and legislative victories to Democrats in yesterday’s elections that bode well for...