Voters in Florida and New York went to the polls Tuesday to decide, among others, critical statewide races, the victors of two House special elections, and a historical showdown between two powerful incumbent Democrats. 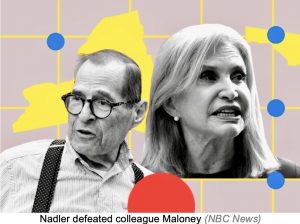 NEW YORK
New York 12 CD: In the last of the six primary elections where redistricting pitted incumbent Members of Congress against each other, Congressman Jerrold Nadler prevailed over Congresswoman Carolyn Maloney 55.4% to 24.4%. Attorney Suraj Patel secured 19.2%.

Nadler and Maloney have represented liberal Manhattan's Upper West Side and Upper East Side, respectively, since being elected in 1992.

Nadler, who as Chair of the House Judiciary Committee led both impeachments of Donald Trump, was buoyed in the last weeks of the campaign by endorsements from The New York Times and New York Senator and Majority Leader Chuck Schumer. Maloney is the first woman to chair the House Oversight and Government Reform Committee. Nadler will be challenged by GOP nominee Michael Zumbluskas. 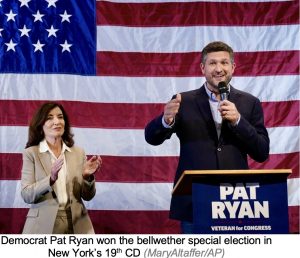 The battleground seat, which slightly favors the GOP, was closely watched for its reflection of the political climate nationally. In the Albany-based district, which Trump won in 2016 and Biden narrowly won in 2020, Democrats turned out in disproportionately high numbers to elect Ryan, a tech entrepreneur and Ulster County Executive who ran on preserving abortion rights.

Molinaro, a former Mayor of Tivoli, former State Assemblyman and current Dutchess County Executive, ran on the economy and crime.

In the contest for the regularly scheduled election for the 218th Congress, however, the two are running in different districts, with Ryan running in the redrawn 18th district against Republican Colin Schmitt, and Molinaro in the new 19th district against Democrat Josh Riley. Both seats, which take in parts of the current 19th CD, are competitive. 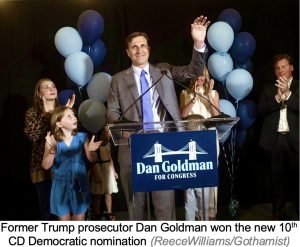 Sempolinski, however, will only serve for the next four months as he is not running for the regular general election in November. Instead, Della Pia will face state Republican Party Chairman Nick Langworthy, who defeated right-wing Carl Paladino, 52.1% to 47.9%, in the GOP primary.

CD 3: Robert Zimmerman won the Democratic nomination in the open seat vacated by Congressman Tom Suozzi to run unsuccessfully for nomination for Governor. Zimmerman, who defeated four other contenders with 35.8% of the vote, will face Republican George Santos in the toss-up contest.

Maloney easily won the 17 CD primary with 66.7% and will be challenged by Republican Michael Lawler. 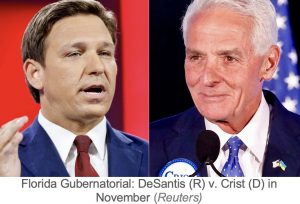 FLORIDA
US Senate: Two-term Republican Senator Marco Rubio will be challenged by Congresswoman Val Demings, who swept the Democratic primary with 85%.

Governor: Republican incumbent Ron DeSantis, a 2024 White House aspirant, will face former Governor and Congressman Charlie Crist, who secured the Democratic nomination with 60% to state Agriculture Commissioner Nikki Fried's 35.1%. Crist, who served as the Republican Governor of Florida from 2007 to 2011, has served in Congress as a Democrat since being elected in 2016.

The pre-primary University of North Florida survey had DeSantis leading Crist 50% to 42%. 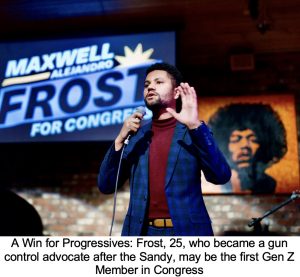 CD 10: In the open seat to replace the Orlando-based district held by Demings, progressive activist Maxwell Frost prevailed in the Democratic primary with 34.3%. He was followed by State Senator Rudolph Bracy (24.8%), former Congressman Alan Grayson (15.5%) and former Congresswoman Corrine Brown (9.6%). Six other candidates came in at under 7%.

Frost will face conservative veteran Calvin Wimbish in the general.

CD 11: Three-term Republican Congressman Daniel Webster, an election denier, fended off a primary challenge by even more fervent far-right activist Laura Loomer, 51.1% to 44.2%. Webster is being challenged by Democrat Shante Munns in the general election.

CD 13: In the Tampa-area seat vacated by Crist, Obama administration official Eric Lynn (D) will go up against Trump-endorsed author Anna Paulina Luna (R), who won the GOP primary with 44.5%. 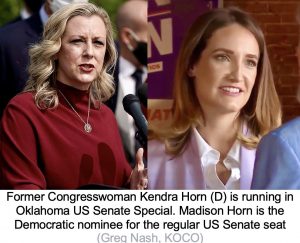 The winner of the special general election in November will hold the seat until January 2027, the end of Inhofe’s current term.

June 22, 2021 Last Monday, the House Judiciary Committee announced it is opening an investigation into actions by the US Department of Justice (DOJ) under the Trump administration to seize records...