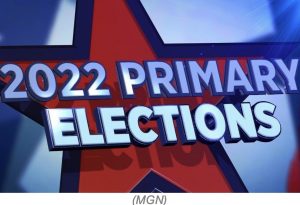 It was not the high-profile candidate contests, or the impact of Trump's influence in the primaries, however, that swept the news of the night. It was the astounding defeat of a state constitutional amendment to ban abortion in Kansas.

ARIZONA
US Senate: Incumbent Senator Mark Kelly (D), who was elected in November 2020 to fill the remaining term of the late Senator John McCain (R), will face Thiel Capital CEO Blake Masters in his reelection bid to a full term. 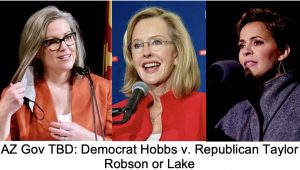 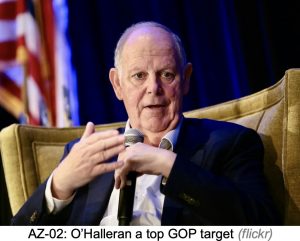 AZ-02: The race to challenge two-term Democrat Tom O’Halleran is still undetermined, with veteran Eli Krane (33.9%) followed by State Representative Walter Blackman at 24.2%, Mark DeLuzio at 17.9% and four other candidates are below 8% (72% reporting). 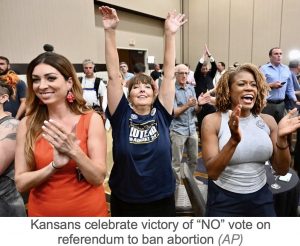 KANSAS
US Senate: Two-term Republican Senator Jerry Moran, who is supported by Trump, easily won his primary with 80.5%, and will be challenged by former Kansas City Mayor Mark Holland, who won the six-way Democratic primary with 38%.

Governor: Governor Laura Kelly, the only incumbent Democrat running for reelection in a state that voted for Trump in 2020, will be challenged by Trump-endorsed Attorney General Derek Schmidt in one of 2022's most competitive gubernatorial contests. 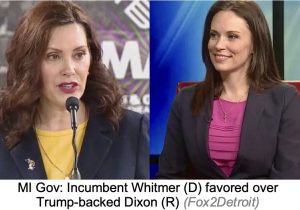 KS-03: Two-term Democratic Congresswoman Sharice Davids, the only Native American in the US House, is facing a rematch against former Kansas Republican Party chairwoman Amanda Adkins, who lost to Davids 43.8% to 53.5% in 2020. The newly redrawn 3rd CD is more favorable to Republicans, however, making this a highly competitive contest.

The GOP primary was shaken up in May when five candidates, including some big spenders, didn't collect enough valid signatures to make the ballot. Trump endorsed Dixon last Friday.

MI-03: Congressman Peter Meijer, one of 10 Republicans who voted to impeach Trump, lost his seat to Trump-backed challenger John Gibbs in the Republican primary, 48.2% to 51.8%. Gibbs will face former DOJ attorney Hillary Scholten in the toss-up contest in the new, more Democrat-friendly 3rd CD. 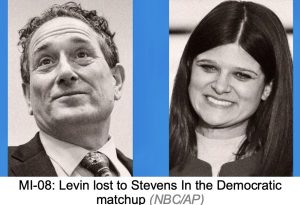 MI-11: In a race where redistricting pitted two Democratic incumbents against each, Congresswoman Haley Stevens defeated fellow Congressman Andy Levin, 59.9% to 40.1%. Both were elected in 2018. Republican Mark Ambrose will take on Stevens in November. 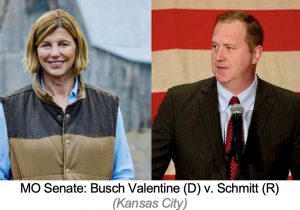 MISSOURI
US Senate: In Tuesday's most-watched primary, state Attorney General Eric Schmitt won the GOP nomination in the race to succeed retiring Republican Senator Roy Blunt. Schmitt secured 45.7% of the vote to Congresswoman Vicky Hartzler's 22.1% and former Governor Eric Greiten with 18.9%. Trump had issued a last-minute endorsement for "Eric" without specifying which one he was supporting.

In the Democratic primary, nurse, philanthropist, and Anheuser-Busch heir Trudy Busch Valentine won the nomination with 43.2%, followed by Lucas Kunce (38.4%) and nine other candidates that came in under 5%.

MO-07: In the open seat being vacated by Congressman Billy Long (R), who ran in the US Senate primary, State Senator Eric Burlison prevailed in the GOP primary with 38.3%, followed by Jay Wasson (22.5%), Alex Bryant (18.9%) and five other candidates under 9%. The Democratic nominee is small business owner Kristen Radaker-Sheafer, who won the primary with 63.3%. 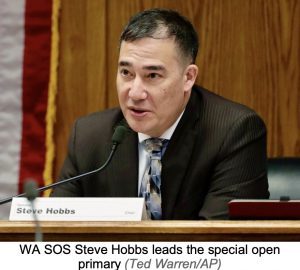 WASHINGTON
Washington has open primaries, in which all candidates run in the same primary race, regardless of party, and the top two candidates advance to the general election in November.

US Senate: Two-term Democratic Senator Patty Murray, advanced to the general election in the first slot with 54%, with Republican Tiffany Smiley, a motivational speaker, taking the second with 32% among sixteen other contenders.

With 47% reporting, Independent Julie Anderson (12.9%), and Republicans Bob Hagglund (12.4%) and Keith Wagoner (12.2%) are competing for the second slot to face Hobbs in November.

WA-08: Two-term Democratic Congresswoman Kim Schrier appears to be headed for reelection, having secured 49.4% in the open primary, with three contenders, Republicans Matt Larkin (15.9%), Reagan Dunn (15%) and Jesse Jensen battling it out for second place (53% reporting). 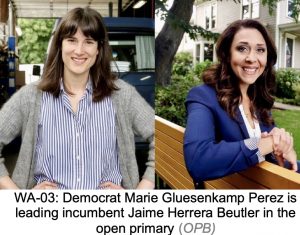 Two of the ten Republicans who voted to impeach Trump hail from Washington State, with both appearing to have survived their open primaries to advance to the general election. Final results, however, are not expected for several days.

WA-03: In the nine-candidate open primary for the Third Congressional District, held by six-term Republican Congresswoman Jaime Herrera Beutler (R), Democrat small businesswoman Marie Perrez is leading with 31.8%, followed by Herrera Beutler (24.5%) who is fighting for the second place slot with Trump-endorsed veteran Joe Kent (20.1%). At 57% reporting, six other candidates are at below 16%.

WA-04: With 48% reporting, four-term incumbent Dan Newhouse (R) is leading the open primary with 27.2%, followed by Democrat Doug White at 26% and Trump-endorsed Loren Culp at 21.9%. Five other candidates are coming in at under 12%.

The Democratic National Committee is meeting in Chicago, Illinois this week for their Summer Meeting to discuss party reforms to the presidential nominating process, and strategy going into the...

February 7, 2022 The Olympic Games, the world’s foremost sports competition, began last Thursday under the cloud of controversy and politics surrounding the host country, China. The 2022...