Voters in Alaska and Wyoming yesterday cast their ballots, delivering a vengeful victory for former President Donald Trump in The Equality State, and some hope for Democrats in The Last Frontier State's open at-large seat. 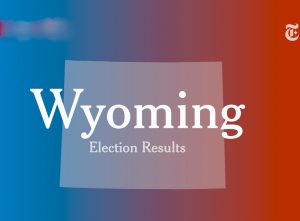 In the At-Large Congressional seat, Hageman will face off against Lynnette GreyBull, a national Native American activist, who won the Democratic primary with 62.3%.

Cheney, daughter of former Vice President Dick Cheney, was a rising star in the national GOP leadership until her public break with Trump following the January 6th attack on the US Capitol. She was one of ten GOP members who voted to impeach the former president and, as Co-Chair of the House January 6th investigative committee, Cheney soared to the top of Trump's list of adversaries.

Undeterred by the anticipated loss, Cheney spoke to supporters Tuesday night saying, "This primary election is over, but now the real work begins."

Her campaign also announced that, in the coming weeks, Cheney will be transforming her campaign operation, which has roughly $7 million still in the bank, into a political action committee called "The Great Task." the organization will "educate the American people about the ongoing threat to our Republic, and to mobilize a unified effort to oppose any Donald Trump campaign for president." 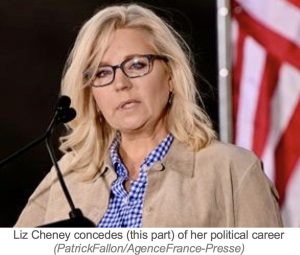 Cheney has also acknowledged, most recently to NBC last week, that she is "thinking" about running for president herself in 2024.

Governor: Incumbent Republican Governor Mark Gordon, who is running for a second term, fended off three primary opponents to win renomination with 61.7%. He is being challenged by Democratic nominee Theresa Livingston.

ALASKA
In the House At-Large Special General Election to fill the remaining four months of the late Congressman Don Young's (R) 2022 term, the winner is still undetermined, with no candidate having reached the 50% threshold for victory.

Under Alaska's new all-party open primary system, implemented in the June 11 special election primary, the top four candidates advance to the general election, where the winner is determined by ranked-choice voting. 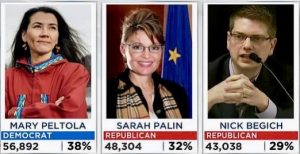 Additional ranked-choice election results are scheduled to be released on August 23, August 26, and finally on August 31.

In the August 16 regularly scheduled House At-Large Primary Election for the 118th congressional term that begins next January, Peltola (35.2%), Palin (31.2%) and Begich (26.8%) secured the top three slots. The fourth is expected to go to former Trump administration Assistant Secretary of Interior for the Bureau of Indian Affairs Tara Sweeney who, at 71% reporting, had 3.7%.

US Senate: Three-term incumbent Senator Lisa Murkowski, who was one of seven Republican senators who voted to convict former President Donald Trump in his second impeachment trial, leads the final four primary victors with 44.1%. 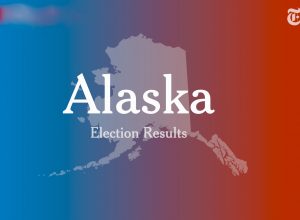 Trump-endorsed Kelly Tshibaka, a former commissioner in Alaska’s Department of Administration has secured the second spot with 39.9% and, among the remaining 17 candidates in the open primary, Democrat Patricia Chesbro (6.2%) and Buzz Kelley (2.2%) are likely to take the other two slots.

Governor: First-term Governor Mike Dunleavy, a Trump-endorsed Republican, leads the final field of four winners in the open primary with 41.8%, followed by former Governor Bill Walker (22.1%), who is running as an independent, and former Democratic State Representative Les Gara at 22%. Kenai Peninsula Borough Mayor Charlie Pierce, currently at 6.8%, is expected to secure the final slot.