October 19, 2016
While it may not be possible to "Rig" an election (see Monday's Daily: Rig? How It Works), there are unfortunately still efforts to suppress the rights of individuals to vote through deceptive tactics, voter intimidation and false information.
Although modernized voting methods have eliminated some traditional practices, there are many attempts to deny citizens the opportunity to cast a ballot and have it counted, particularly in disenfranchised communities. 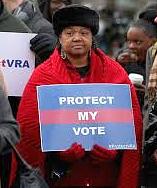 To help you protect your right to vote and others, a 101 on Election Protection:
Laws in Your State: Education is always the first line of defense. For the voting laws in your state regarding Voter Registration, Absentee Voting and Early Voting, see our past Dailys:
DemDaily: Your Voter Registration: Voter Registration is still open via online, mail, in person and/or same-day registration in 18 states plus DC.
DemDaily: Absentee Voting: See upcoming ballot request deadlines.
DemDaily: Cast Your Early Vote: Early Voting has already begun in over 15 states.
Misinformation: Technology can be a friend or foe. Robocalls, E-mail, Text, Facebook, Twitter. While any organized campaign is using these tools to get-out-the-vote, they can also be used to spread misinformation. Be wary of any messages alerting you to changes in voter requirements, polling hours and locations.

Report Voting Irregularities & Infractions: Attempts to intimidate and confuse voters have already begun. The DNC, non-partisan election and allied orgs have hotlines and volunteer legal experts standing by to report deceptive practices and answer your questions.
Resource Links
The Election Protection Coalition: www.866ourvote.org
DNC Voting Rights Institute: www.democrats.org/voting-rights-institute
Send us your state's election protection resources, and we will post on DemList!
Coming Soon: Bullies at the Ballot Box!
TONIGHT'S DEBATE
Amid Donald Trump's increasing claims of a "rigged" election, tonight's third and final presidential debate promises no shortage of drama - and possibly the last opportunity for the GOP nominee to convince the American public that he is capable of governing in the nation's highest office.
October 19, 2016 Presidential Debate
Check the DemList Calendar for voter information links and remaining HRC public events!
DemList
Connecting you to The Party
Connecting you to Each Other
Kimberly Scott
Publisher

March 4, 2020 In a stunning turn of events yesterday, Joe Biden won ten states to Bernie Sanders three in the Super Tuesday primaries, historically reshaping the 2020 race for the White House...