While the public does not go to the ballot box to elect a new president for another 966 days, the Democratic party has been working on re-defining the process of how they will elect their nominee.

How it Currently Works
Each political party allocates a number of "pledged" (Democrats) or "bound" (Republicans) delegate slots to each state, usually in proportion to the state's population.

For Democrats, candidates win delegates based on the percentage of the vote they secure in a state primary or caucus, but the rules vary in some states.  The candidate who secures a simple majority (50%) or 2,383 of the party's 4,762 delegates wins the nomination.

In addition, Democrats have "superdelegates," who are party leaders and elected officials who are free to support any candidate, regardless of the popular vote, and account for 712 (approximately 30%) of the total delegates.

Superdelegates were first created in 1982 as a means of providing party leaders more influence in ensuring the election of a viable nominee, and to allow Members of Congress their own vote without having to compete for alloted slots.  Over the years the number has increased with the expansion of the party's infrastructure, and to include the sway of key constituency and political players.

For the 2020 presidential election, however, the Democratic party is considering re-writing the rules. 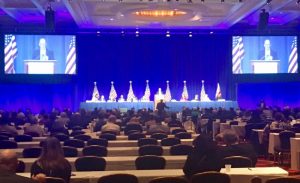 DNC Chair Tom Perez at Winter meeting, we have  "ended one chapter of our journey and started another chapter...a journey of success and inclusion"

The divisive 2016 primary contest between Hillary Clinton and Bernie Sanders produced a controversy over the role of superdelegates that has remained a point of contention between factions of a party still seeking to heal the riff.

So extreme was the debate that, before the convention was out, a "Unity Reform Commission" was formed at the agreement of both camps, to "review the presidential nominating process and recommend changes to help ensure the process is accessible, transparent and inclusive."

The 21-member Unity Reform Commission (URC) has since met five times in public sessions to hear proposals for revising the system, and in December made their formal recommendations to the DNC's Rules and Bylaws (RBC) Committee.

Although the RBC has six months to act on the URC's recommendations before they are officially approved by the elected members of the DNC at the 2018 Summer Meeting, they are "acting swiftly" to affirm and unify members on the proposed changes.

Most of the changes in the categories of party primaries, reforms and caucuses are expected to pass. The most controversial by far, however, is the reduction of unpledged superdelegates and "how to require certain unpledged delegates to cast their votes at the Convention for candidates in proportion to the vote received for each candidate."

The proposed reduction of superdelegates who are unpledged by nearly 60% is supported by most, including DNC Chair Tom Perez and Deputy Chair Keith Ellison, "to make our presidential nominating process more democratic." 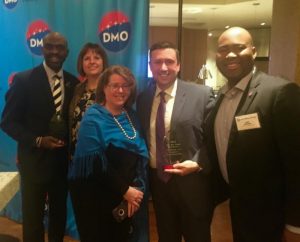 But the proposal to remove superdelegate votes from the Democratic Convention's first ballot altogether, however, has been met with significant opposition -- as evident at the Saturday's DNC winter meeting when many members banged on their tables in response to debate on the subject.

Members of the DNC, who are elected as committeemen and committeewomen at the local level to represent Democrats in their state, fall in the category of superdelegates and some say stripping them of that vote would be counter to their fundamental role.  Although an alternative proposal would allow them to vote on a second ballot, the nomination process rarely has gone past the first ballot.

Proponents counter that the current system of allowing superdelegates to cast their independent votes on the first ballot with those bound by, and earned, through the state primary elections is undemocratic. Citing the 2016 convention, they also say it unfairly favors one candidate over another in a close contest.

Any proposal to change the DNC bylaws and power of delegates will need two-thirds support from the 447 DNC members to pass.

April 24, 2017 This week kicks off the countdown to Donald Trump’s 100th day in office, and the anticipated daily analysis between now and April 29th, of campaign promises kept or broken...