On Wednesday, The Commission on Presidential Debates announced moderators for the three presidential and one vice presidential debate between now and the November 3, 2020 election. All four debates will be moderated by a single individual.

Although the role and effectiveness of presidential debates have long been a subject of dispute regarding their impact on viewing voters, there is no question that America tunes in for the show. 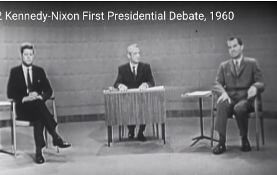 The first televised presidential debate between John F. Kennedy (D) and Richard Nixon (R) in 1960 drew 66 million viewers out of a population of 179 million

In Pew Research Center surveys conducted since 1988, three-fifths or more of voters say the debates were very or somewhat helpful in deciding which candidate to vote for. The high point was 1992, when 70% of voters said the three-way debates that year between Bill Clinton, George H.W. Bush and Ross Perot were at least somewhat helpful. 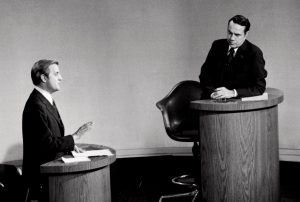 Debates, however, are not the determining factor for most voters. In 2016 only 10% of voters said they had definitively made up their minds "during or just after" the presidential debates. By comparison, 11% said they'd made up their minds in the days or weeks on or just before Election Day, 22% during or just after the party conventions, and 42% before the conventions. 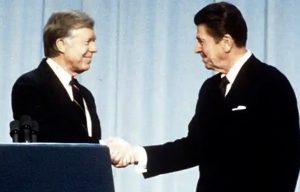 The October 2, 1980 debate between Jimmy Carter and Ronald Reagan drew 80 million viewers out of a population of 226 million

Regardless of their impact on the outcome of elections, debates attract more viewers than any other televised event outside of the Super Bowl.

According to Nielsen Media Research, the first 2016 debate between Hillary Clinton and Donald Trump drew a record 84 million television viewers, but that figure does not include online streaming or CSPAN viewers. By comparison, the final nights of the parties' 2016 conventions attracted fewer than 35 million viewers each. 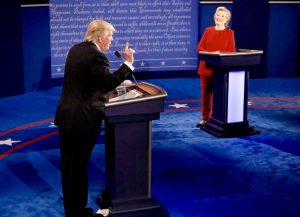 First Trump-Clinton debate is the most-watched of all time with 84 million viewers, not including online streaming (ABC)

This viewership for the final night of the 2020 political conventions, including broadcast and cable networks, was under 25 million, with 23.81 million watchers for the GOP and 24.60 million turning on the tube for Democrats'.

Although a drop from 2016, it is an unlikely gage of voter interest in seeing the first head-to-head historic match up between Joe Biden and Donald Trump on September 29th.

DemList will be watching and, as always, will keep you informed.

Have a safe and enjoyable Holiday Weekend!

Strategy. Power. Justice. Those are the themes of the Midwest Academy, which has trained organizers for over forty years, and tonight honors some of our nation’s most acclaimed progressive...