In what is likely to be the final debate before the January 5th Senate runoff elections, incumbent Republican Kelly Loeffler and Democratic challenger Raphael Warnock went head-to-head on stage last night in Atlanta, Georgia.

The debate, hosted by the Atlanta Press Club, was for one of two Georgia Senate races still hanging in the balance, and which will decide the fate of power in the United States Senate. 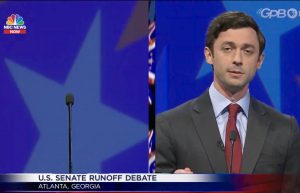 Perdue has come under even greater scrutiny in recent weeks regarding his standing as the Senate's most prolific stock trader. According to Senate Stock Trader, which monitors the trading activity of US Senators, Perdue's 2,596 trades since being elected roughly equal the combined trading volume of the next five most active traders in the Senate.

Although Perdue's trading activities warranted investigations by the Department of Justice (DOJ), the Securities and Exchange Commission (SEC) and the Senate Ethics Committee earlier this year, no charges were brought against the freshman Senator.

In their previous October 29th debate, Ossoff now famously hammered Perdue on his handling of the coronvirus pandemic and the investigations, "Perhaps Senator Perdue would have been able to respond properly to the covid-19 pandemic if you hadn't been fending off multiple federal investigations for insider trading." 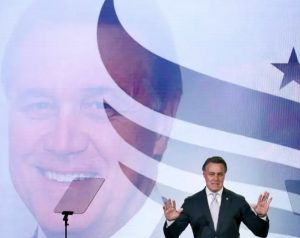 Facing only the moderators and, as he frequently pointed out, an empty lectern where Perdue would have stood, Ossoff took advantage of the optics to hit again on the Senator's record.

"The reason that our country has lagged the entire world at the efficacy of our response to this virus...is because of the arrogance of politicians like David Perdue. So arrogant that he disregarded public health expertise...Your Senator feels entitled to your vote. Your Senator is refusing to answer questions and debate his opponent because he believes he shouldn't have to."

A November 27-30, 2020 survey conducted by SurveyUSA of likely voters showed the two in a statistical dead heat with Ossoff at 50% to Perdue's 48%.

Raphael Warnock (D) v. Kelly Leoffler (R)
In Sunday night's debate, Reverend Raphael Warnock and Senator Kelly Loeffler faced off in a one-hour, sometimes heated exchange that reflected the high stakes of the election -- now less than one month away. 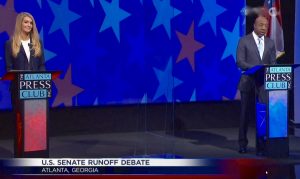 Loeffler, co-owner of the WNBA Atlantic Dream, was appointed to take the seat formerly held by Senator Johnny Isakson (R), who stepped down in mid-2019 citing health concerns, with a special election to fill Isakson's full term November 3rd.

Reverend Raphael Warnock, along with 18 other candidates, challenged Loeffler in the open election, resulting in the two as top vote-getters, with Warnock at 32.9% and Loeffler at 25.9%.

From the outset, Loeffler attempted to paint her Democratic opponent as a "radical liberal," at one point asking Warnock if he would renounce socialism and Marxism. He responded, "Listen, I believe in our free enterprise system, and my dad was a small business owner," segueing into his upbringing and community work.

Loeffler continued to hammer on Warnock as a left-wing threat, "If the Democrats win, they will defund the police. They'll keep our country locked down. They'll raise your taxes in the middle of a pandemic, and they'll continue to keep the borders open and support taxpayer funding for illegal immigrant healthcare ...radical liberal Raphael Warnock would be a rubber stamp for Chuck Schumer, because he's bought and paid for by tens of millions of dollars from out of state, dark liberal money." 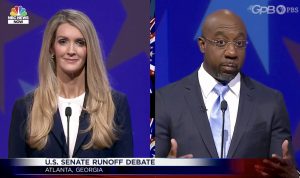 Over the course of the debate Loeffler repeatedly dodged questions on President Donald Trump's false claims of widespread voter fraud and election-rigging, saying only that the President has "every right to every legal recourse available."

As anticipated, Warnock went after the Senator for using "the people's seat to enrich yourself," in the same stock trading scandal and investigation that has plagued Perdue, and which has been the subject of millions of dollars in ad attacks against the two candidates by Democrats.

The trades by both Loeffler and Perdue have come under particularly intense scrutiny for their timing related to the COVID-19 pandemic.

Warnock to Loeffler: "You dumped millions of dollars of stock in order to protect your own investments and then weeks later when there came an opportunity to give ordinary Georgians an extra $600 of relief, you said you saw no need and called it counterproductive."

Loeffler: "Those are lies perpetrated by the left wing media and Democrats to distract from their radical agenda." 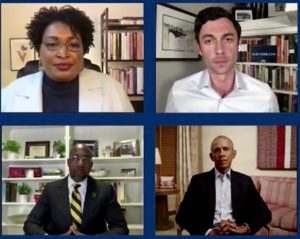 The two agreed on one point. On the heals of the state's highest-ever single day report of new coronavirus cases, both candidates confirmed they would take the COVID vaccine.

Sidenote: Today is the voter registration deadline for voting in the Georgia runoff. As of this morning more than 940,000 absentee ballots had been requested.

October 13, 2022 Once the bellwether of the country, the Midwest battleground state of Ohio broke its 60-year record of voting with the winning presidential candidate when it voted for Trump by...