Oregon Governor Kate Brown (D) on Tuesday announced she was commuting the death row sentences of all 17 of the state's inmates awaiting execution, changing them to life in prison without the possibility of parole. 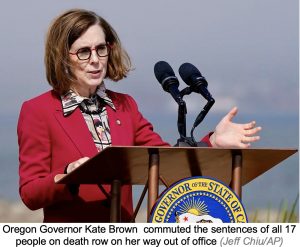 “This commutation is not based on any rehabilitative efforts by the individuals on death row,” the term-limited Brown said, in one of her major acts before leaving office. “Instead, it reflects the recognition that the death penalty is immoral. It is an irreversible punishment that does not allow for correction, is wasteful of taxpayer dollars (and) does not make communities safe."

Oregon has abolished and readopted capital punishment several times throughout its history, most recently reinstating it in 1984, three years after the Oregon Supreme Court declared it unconstitutional. The state has not executed a prisoner since 1997.

In her first news conference after becoming governor in 2015, Brown announced she would continue the 2011 death penalty moratorium imposed by her predecessor, Governor John Kitzhaber (D).

History
Along with Japan, South Korea, Taiwan, and Singapore, the United States is one of five advanced democracies and the only Western nation that applies the death penalty regularly. Globally, it is legal in 55 countries.

In 1972, the US Supreme Court struck down capital punishment statutes in Furman v. Georgia, reducing all pending death sentences to life imprisonment at the time. Rather than declare it unconstitutional, the justices found that states were applying the death penalty arbitrarily and in a discriminatory manner.

In response, more than 30 states rewrote their death penalty statutes, and in 1976 in Gregg v. Georgia, the High Court affirmed the constitutional legality of capital punishment in the United States.

The federal death penalty, however, was not reinstated until 1988 under a narrow class of offenses, which were expanded to 60 under the Federal Death Penalty Act of 1994. All involve murder, with the exception of espionage, treason, and drug trafficking in large amounts. 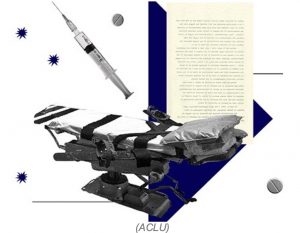 While public support for executions had climbed as high as 80% in the 1990s, attitudes began to shift after the millennium. This was due in part to the rise of death row exonerations, legal advocacy, and exposure of flaws in the criminal justice system.

Supreme Court rulings in 2002 and 2005 found the death penalty unconstitutional for the “mentally retarded” and defendants who committed their crimes as juveniles, in violation of the Eighth Amendment's "cruel and unusual punishment" prohibition.

Although the federal government had not executed a prisoner since 2003, the Trump administration's Department of Justice announced its plans to resume executions for federal crimes in 2019. Between July 2020 and January 2021, thirteen federal death row inmates were executed.

On July 1, 2021, under the Biden administration, Attorney General Merrick Garland announced that a moratorium on the federal death penalty was being reinstated while the Department of Justice (DOJ) undertakes a review of related executive branch policies adopted under the Trump administration. 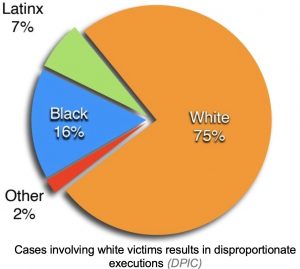 According to the Death Penalty Information Center, 17 people have been executed in the United States in 2022, all by lethal injection and all in Texas, Oklahoma, Arizona, Missouri and Alabama.

While US executions have declined by 75% since 1999, racial bias remains a constant.

Contemporary studies find that defendants were more likely to be sentenced to death if they killed a white person. 75% of the cases involve the murder of white victims, even though black and white people are about equally likely to be victims of murder.

With less than three weeks until the swearing-in of the 115th Congress and the beginning of confirmation hearings, President-elect Trump is close to finalizing his Cabinet nominations.