Last week the Census Bureau released the final refined data on the redistricting numbers, representing a shift in the congressional district count in 13 states going into the 2022 midterms.

Typically, the census numbers are delivered in December of the census year. Due to the pandemic and interference by the Trump administration, however, the population totals were not released until April, with the apportionment census block numbers used to redraw voting districts across the country released on August 12th.

As mandated by the United States Constitution, the US Census is the decennial (every ten years) count of persons dwelling in US residential structures. The census apportionment data is used to redraw or "redistrict" the new breakdown of the 435 US House seats and 7,383 state legislative seats across 50 states, determining the geographic and political makeup of Congress for the next ten years. 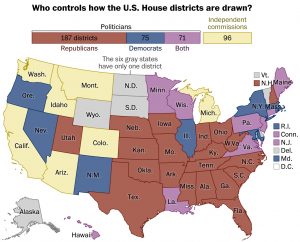 In what is already a contentious and partisan process, the delay in redistricting cut significantly into the timeline for mapmakers to draw their lines - a process that is different in every state.

In 31 states the plan is subject to gubernatorial veto, which may be overridden by a super or simple majority vote in eight. In the states that comprise one congressional district each, redistricting is unnecessary.

Nationwide, however, the GOP has the advantage, with ultimate control of the restricting process in 20 states, while eight are controlled by Democrats and nine are split.

Although redistricting is now well underway, the delay in apportionment numbers had the ripple effect of leaving 2022 candidates and incumbents in limbo as to if or where they will be running less than a year before their primaries.

The most immediately impacted were New Jersey and Virginia, which are holding legislative races this November 2021, with primaries that took place June 8, 2021, prior to the availability of the apportionment data. Both were forced to hold the legislative elections under current lines, but with political consequences. 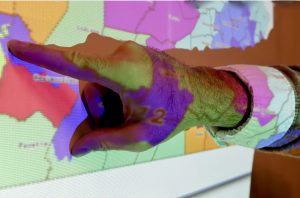 In Virginia, that may disadvantage Democrats, as the population growth since 2010 in Democratic-leaning Northern Virginia won't be taken into account, and the old State House map was drawn under a Republican gerrymander. Although a quarter of the districts redrawn after a 2018 federal court ruling deemed them racially gerrymandered, much of the map could still benefit Republicans in 2021.

For the redistricting process itself, Virginia is using a new hybrid, bipartisan commission consisting of eight legislators and eight non-legislator citizens, evenly divided between Democrats and Republicans.

Another 21 states have constitutional or statutory redistricting deadlines with fixed dates or ones tied to the traditional census year for state legislative redistricting, and another 12 have similar deadlines for congressional mapping.

So far, nine states have released proposed maps, all at different stages in the approval process, with more than one likely to end up in the courts.

The Balance of Congress 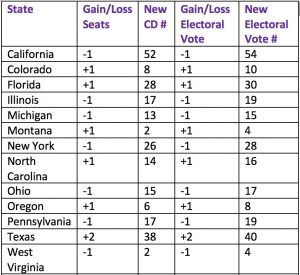 What we do know from the census apportionment data is the reshuffling of congressional districts and electoral votes in each state, reflecting a population shift from the Midwest and Northeast to the South and West.

One state, Texas, will gain two seats, while Colorado, Florida, Montana, North Carolina and Oregon will gain one.

Although Democrats currently hold a nine-seat majority in the US House, historically the party holding the White House in the midterm elections experiences losses in the House.

Based on GOP control of the redistricting process in so many states, 2022 is already proving to be a challenging one for Democrats.

September 14, 2017 In following on our rundown on vulnerable House Republicans, a look at the most competitive Democratic seats in the 2018 battle for control of the House. Democrats hold 194...