With now more than two-thirds of state redistricting maps approved, the political landscape of the 2022 elections is finally coming into focus, with the final battles likely to be played out in the courts. 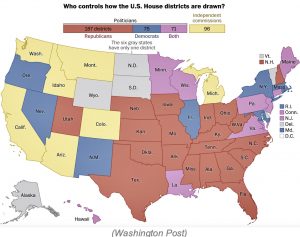 The Process
The 2022 redistricting process was historically upended by the months-long delay in the census count caused by the coronavirus pandemic and interference by the Trump administration.

In what is already a contentious and partisan process, the delay cut significantly into the timeline for mapmakers to draw their lines - a process that is different in every state.

In the 37 states where elected officials could ultimately decide the borders of congressional maps, 22 are fully in Republican control, eight are held by Democrats, and seven are split. The remainder may be determined by a commission, committee, or hybrid of the legislature and a committee that draws the lines.

The Approved
So far, 32 states have approved new maps, finalizing 268 of 435 congressional districts.

One District: In six states which have only one congressional district - Alaska, Delaware, North Dakota, South Dakota, Vermont and Wyoming - redistricting is limited to state legislative seats.

Little or No Change: Of the 26 states that have finished redrawing their congressional maps, 15 states saw little or no change in partisan lean of congressional districts. Those include Alabama, Arkansas, Colorado, Idaho, Indiana, Iowa, Maine, Massachusetts, Michigan, New Jersey, Nebraska, Nevada, Utah, Virginia and West Virginia.

Partisan Advantage: An additional 11 state maps saw a shift in favor of one party: 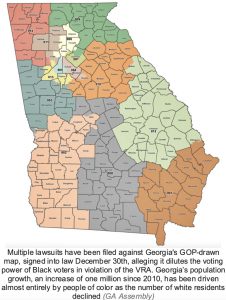 * In Illinois, which lost one seat, Democrats are favored in 13 of 17 congressional districts; one district is competitive and three are Republican.
* In California, which lost one seat, the independent Citizen Redistricting Commission strengthened Democratic incumbent's odds and added new majority-Hispanic districts. The outcome: 43 Democratic-leaning seats, seven Republican-leaning seats and two highly competitive seats.

In six states Republicans benefited most, including Arizona, Georgia, Montana, North Carolina, Oklahoma and Texas.
* In North Carolina, which picked up one seat, the new Republican-drawn map gives the GOP control of 10 of the state's 14 congressional districts. On January 11th, a trial court ruled against a challenge to the map that claimed partisan gerrymandering and racial vote dilution. Democratic-aligned groups are planning to appeal.
* In Texas, which picked up two new seats for a total of 38, the Republican-drawn map passed in October is facing numerous legal challenges. Most recently, on December 6th, the US Department of Justice filed a lawsuit challenging the map as violating the Voting Rights Act (VRA). 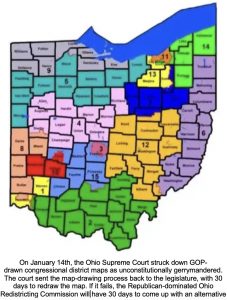 The Outstanding
Among the 18 remaining states that have yet to finalize their maps, the redistricting process is controlled by the GOP in nine, by Democrats in two, and by independent commissions or by both parties in seven.

Awaiting Governor's Signature
Both Kentucky (GOP) and Mississippi's (GOP) plans, which represent no partisan change, have passed in the legislature and are awaiting the governor’s signature.

Passed One Legislature
Plans have passed one of two chambers and are awaiting action in either the State House or Senate in New Hampshire (GOP), Pennsylvania (Both Parties) and South Carolina (GOP). 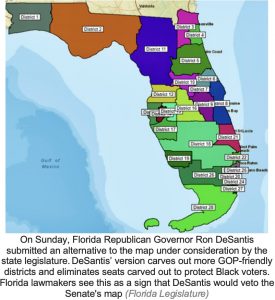 Awaiting Other Action
* Hawaii's independent Reapportionment Commission has passed a plan, which is now before the public for comment, and must be submitted to the state's chief election officer for final approval by February 27th.
* Wisconsin (Both Parties): On November 18, 2021, Democratic Governor Tony Evers vetoed the congressional map passed by the Republican legislature, sending responsibility for redistricting to the Wisconsin Supreme Court, which will hear arguments in mid-January.
* Connecticut (Both Parties): A bipartisan redistricting commission in Connecticut failed to meet its deadlines to approve a map, kicking its redistricting process to the state supreme court. Proposals were submitted to the court-appointed special master, who was to release his own map today, to be followed by a public hearing January 27th.

The Outlook
With the GOP's advantage in control of the redistricting process nationwide, Democrats and allies are turning increasingly to the courts to try to level the playing field.

While federal challenges based on violations of the Voting Rights Act or the Constitution are still in play, the US Supreme Court's 2019 decision, which deferred judgments on partisan gerrymandering to the state courts, changed the legal battleground.

With control of the US House at stake for Democrats, who currently hold a razor-thin majority in Congress, the State Supreme Courts now play a critical role in the balance of power.