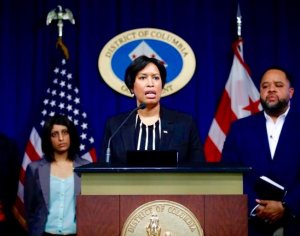 A critical component of the four phases of coronavirus relief legislation passed by Congress over the last seven weeks, is the $1.2+ billion in direct economic assistance to each state, and $3 billion divided by population amongst the US territories.

Downgrading DC
The District of Columbia, however, which is normally treated as a state when it comes to federal funding for housing, Medicaid, education and other programs, was instead designated by Senate Republicans as a "US territory" for the purposes of allocating CARES Act financial aid.

This means the Nation's Capital, which has the densest population of any state or territory, and is home to more than 700,000 residents who pay federal taxes, is receiving less than half of the funding it was expecting.

"D.C. is not a territory; this means according to (the Senate's) treatment, that the District will only receive $500 million while every other state will receive a direct payment of at least $1.25 billion. That's a difference of $725 million," said DC Mayor Muriel Bowser. 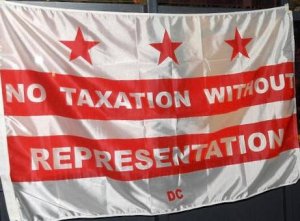 Calling the move "shameful," Maryland Senator Chris Van Hollen (D) said, "the people of the District of Columbia send the IRS more tax revenue than the people of 22 other states."

In a bi-partisan letter to President Trump and Congressional leaders, D.C. Attorney General Karl Racine (D) and 36 fellow attorneys general went further, noting that "District residents contribute more to the federal government on a per capita basis than residents of any other state or territory."

A similar letter organized by DC Vote, and co-signed by over 100 organizations, stated, "D.C. is not a territory. D.C. bears all the responsibility of citizenship and deserves the benefits. This is not a time for opponents of D.C.'s efforts to secure Statehood to make a political statement."

Statehood and Status
Residents of the five US territories, like states, pay into social security, have their own government and elections, follow federal laws, and can freely travel within the US, but do not pay personal federal income tax.

The territories, as well as the District of Columbia, do not have voting representation in Congress, but the similarities end there.

The battle over control of the nation's capital has been raging since the D.C. was created under the Constitution's District Clause over 200 years ago. 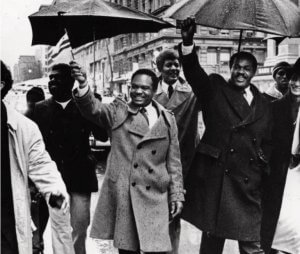 Incorporated as the seat of the United States federal government under the District of Columbia Organic Act of 1801, residents of the new District of Columbia, no longer a part of any state, were stripped of their voting representation in Congress and the right to home rule.

Over the last 100 years, more than 150 constitutional amendments and bills have been introduced to provide representation to the District of Columbia.

It was not until 1961, with the passage of the 23rd amendment, that the citizens of DC would be granted the right to vote for president with three electoral votes, and it was not until 1970 that the District was allowed to elect a non-voting "Delegate" to the US House of Representatives.

Partisan opposition to Statehood is, in part, rooted in the fact that DC has always voted overwhelmingly Democratic, which would mean two new Democratic seats in the US Senate if passed.

In 2016, 86% of DC voters overwhelmingly approved a referendum in favor of statehood, calling for the DC Council to petition Congress to admit the District as the 51st State.

The Ongoing Battle
On March of 2019, the new Democrat-controlled US House of Representatives voted, along party lines, to pass H.R. 1, the For The People Act, which endorsed full congressional voting rights and self-government for the District -- marking the first time a chamber of Congress has endorsed D.C. statehood. 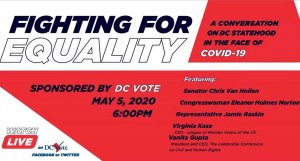 Delegate Eleanor Holmes Norton, who has represented DC since 1990, said, "After decades of struggle, the House of Representatives recognized today that the time has come for D.C. statehood."

While the bill was blocked in the GOP-controlled Senate, it helped set the stage for Norton to introduce H.R. 51, the Washington, D.C. Admission Act, which would make the district the country's 51st state.

Although approved and reported out of committee in February, 2020, it is among the many pieces of legislation awaiting action by a full Congress functioning under the limitations of the coronavirus crisis.

Regardless, Senate Majority Leader Mitch McConnell (R) has vowed that the bill will go nowhere as long as Republicans dominate the Senate, calling the concept of D.C. Statehood "full-bore socialism."

DemDaily: The COVID Count. In Your State.

June 24, 2021 As our country emerges from the worst of the deadly coronavirus pandemic that has claimed the lives of more than 600,000 Americans over the last 15 months, we need to be reminded...