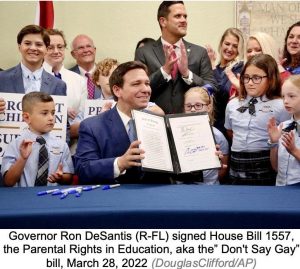 The law, which goes into effect July 1, also includes a parental notification requirement for any health or support services offered to their children -- which they can deny, and which opponents say will undermine LGBTQ support in schools. In another unusual provision, parents may sue school districts if they believe the law has been violated.

The swift passage of Florida House Bill 1557 by the GOP-controlled legislature came after weeks of public outcry and amid a national debate on parental rights and the role of schools in supporting students -- of all sexual identities.

Supporters say the law is meant to allow parents to take control of when and how to discuss issues of sexual orientation with their children. 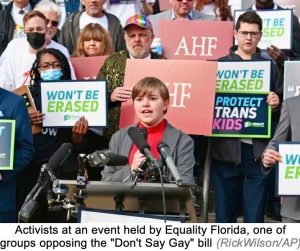 Opponents fear the law could lead to higher rates of health risks and suicide among LGBTQ youth, who are already at a higher risk than their straight and cisgender peers. Groups such as the Trevor Project condemned the law, saying it erases “LGBTQ identity, history and culture -- as well as LGBTQ students themselves.”

Opponents also argue it would ban teachers from encouraging the children of same-sex couples from discussing their families at all, stigmatizing those children and LGBTQ students themselves.

A lawsuit filed March 31 by LGBTQ-advocacy groups, parents, students and a teacher argues the legislation violates constitutional free-speech and equal-protection rights. The outcome could prove a motivating issue for swing voters in the midterm elections. 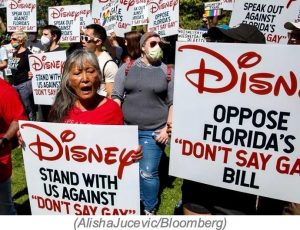 Florida’s law follows a wave of legislation passed in the last year aimed at restricting the teaching of critical race theory and LGBTQ-related materials. Since January 2021, over 35 states introduced bills to limit discussions of race in classrooms, nine of which are now law.

At least three states - Arkansas, Montana and Tennessee - have passed bills allowing parents to have their children opt-out of lessons that mention sexual orientation or gender identity.

Ohio and Louisiana are the most recent states to introduce their own "Don't Say Gay" bills, while in Texas last month, a state district judge temporarily blocked Governor Greg Abbott's February 22 directive ordering state child welfare officials to report as child abuse any parents who assist their transgender children in getting gender-affirming health care.

In 2022 alone, 238 anti-LGBTQ bills have been introduced in state legislatures. 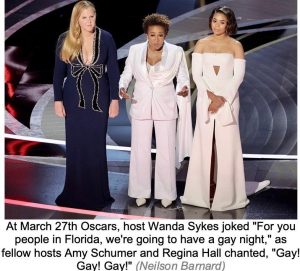 Some of those relate to banning books that address sexual identity in their content or characters. According to the American Library Association, an unprecedented 729 book challenges were reported last year.

Passage of the Florida bill drew immediate backlash from major corporations, including Disney, which is among the state's largest corporations, employing some 77,000 people.

In a statement Monday, the multinational corporation condemned the legislation, stating, “Our goal as a company is for the law to be repealed by the legislature or struck down in the courts." Disney had previously stated that it is "committed to creating experiences that support family values for every family, and will not stand for discrimination in any form ... that infringes on basic human rights." 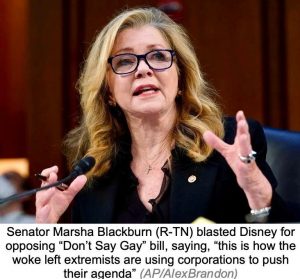 On March 22, hundreds of Disney employees staged a daylong walkout to boycott the company's initial decision not to weigh in on the bill, arguing that management's inaction threatened their safety and wellbeing.

They also demanded that Disney, which donated about $4.8 million to Florida candidates and groups in the 2020 election cycle, stop donating to 22 Florida politicians involved in the passage of the “Don’t Say Gay” bill. Disney has now paused all political donations in the state.

Other Disney brands, including ESPN, Hulu, and Marvel, have tweeted out their solidarity in supporting LGBTQ workers, and over 50 companies have signed a petition condemning anti-LGBTQ legislation. These include Starbucks, Nordstrom, Pinterest, Target, Mattel, Lululemon and Sony, as well as United Airlines and Oracle, which have a major presence in Florida.