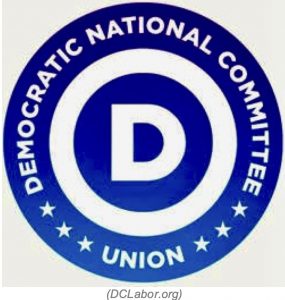 The Democratic National Committee (DNC) is now a union shop.

On January 4th, the staff at the DNC in its national headquarters in Washington, DC, voted overwhelming to join Service Employees International Union (SEIU) Local #500.

While unionization efforts historically stem from workplace disputes, the election was conducted with the full support of DNC leadership.

In a joint statement released by management and staff, DNC Executive Director Sam Cornale said the party was proud to voluntarily recognize SEIU Local 500. "The DNC is strong and only getting stronger because of our smart, diverse, and resilient staff. I am inspired by the incredible DNC team, and that’s especially true today as they live the values we hold dear as Democrats.” 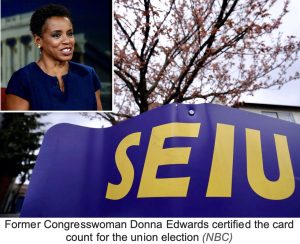 Unlike in a typical union election administered by the National Labor Relations Board, staffers and management agreed to have an independent outside observer count the votes, selecting former Congresswoman Donna Edwards (D-MD), who is also a political analyst for NBC News and MSNBC.

SEIU Local 500, which already represents public-sector employees of several progressive non-profits in Maryland, Virginia, and DC, is the fastest-growing union in the greater DC metro area. A select committee of staff will work with management to draft the first contract.

While this is the first union bargaining unit among national staff, there has been a surge in unionizing Democratic state parties in recent years. In 2018, the Vermont Democratic Party, affiliated with the United Steelworkers Union, became the first unionized political party in the country. There are now close to 20 state Democratic parties that have collective bargaining agreements, represented by the Teamsters, the International Brotherhood of Electrical Workers and other unions. 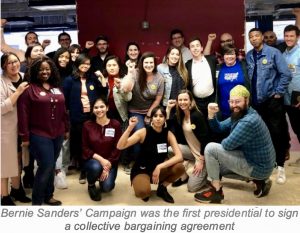 The Campaign Workers Guild (CWG), formed in 2018 as the first labor organization founded specifically to organize political campaign workers, has organized dozens of campaigns and organizations, along with four state parties.

Although just 10.8% of the workforce in 2020, the labor movement has witnessed a recent resurgence in organizing efforts, in part due to the pandemic.

The subsequent shortage in the labor market and the supply chain crisis have emboldened workers to exercise newly found leverage to negotiate for better wages and working conditions.

President Biden, a long-time ally of organized labor, is also pushing for significant labor law reform in the wake of setbacks under the Trump administration. In March, the US House passed the “PRO Act,” a sweeping overhaul of federal labor law designed to invigorate unions by making it easier to organize and harder for state laws to inhibit unions. The law has been blocked in the US Senate, however, without the 60 votes necessary to break the filibuster.

September 17, 2020 The crisis at hand: Not only is the nation reeling under the impact and mismanagement of the COVID crisis, but the economic fallout threatens to become a runaway train. We need...