Deputy DNC Chair Keith Ellison will be taking the Democratic National Committee's Winning With Partners tour to Ferguson, Missouri this weekend to underscore one of the key platform issues of the national party: raising the minimum wage.

The Minnesota Congressman has traveled through almost a dozen states since October, working with a growing coalition of 200+ national and state organizations to organize around key campaigns and issues. 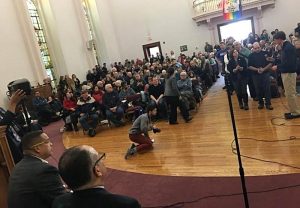 Ellison is going to be in St. Louis, St. Charles, and Ferguson, Missouri this upcoming weekend for public events, including a march to support nursing home workers, represented by SEIU, who are on strike.

The Strike Line
Employees of the Christian Care Nursing Home in Ferguson have been on strike since December 1, 2017 to fight against unfair labor practices.

The strike was prompted by decisions of the facility's new administration, including mandated overtime, canceling or not allowing workers to take vacations, and violations of the existing contract on staffing and scheduling.  The median wage for the almost exclusively African-American staff is $9.65 an hour, and the union is seeking guaranteed raises throughout the life of a new agreement.

Strikers have been joined by faith and community leaders, as well as family members of nursing home residents who say care is suffering under fill-in employees. 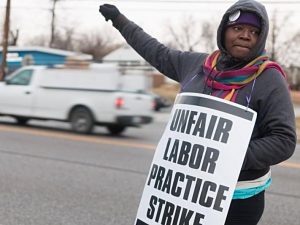 Keith Ellison will be marching from the Town Hall to the Strike Line to support the nursing home workers on Saturday.

RSVP to Join Keith in Ferguson!
For More Info: DoyleR@dnc.org

August 28, 2019 The deadline for qualifying for the Democratic National Committee’s third Democratic primary debate is tonight and, although yet to be formally announced, participants have...