Perez, the former Secretary of Labor under President Obama and the first elected Latino Chair of the DNC, and Ellison, the first Muslim to be elected to Congress (Minnesota's 5th CD), vowed to "educate, organize, and mobilize grassroots energy from Democrats in all 57 states, territories, and Democrats Abroad." -- and by most accounts have delivered. 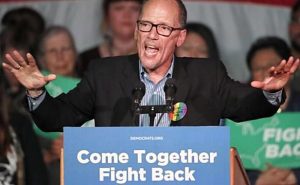 Starting with "The Fight Back Tour", then "Resistance Summer", and now the "Winning With Partners" tour, the two have crisscrossed the country to unite Dems and allies, and build what is now a coalition of over 200 national and state organizations.

The Winning With Partners in 2018 Tour is a joint initiative of the DNC and the Association of State Democratic Chairs (ASDC). The goal is to strengthen progressive infrastructure in key states to both champion democratic issues and values and build towards Democratic electoral victories in 2018.

The program, spearheaded by Ellison, began in October, and has taken him to Nevada, Virginia, Texas, Michigan, North Carolina, Minnesota and, this week, for a Rally and TownHall in Pennsylvania - focused on the fight against the GOP Tax Plan and the fight for the DACA "Dreamers" and fair immigration reform.

Ellison will hold a TownHall this weekend in Connecticutand will travel to Wisconsin, Washington, Indiana, California, Florida and others in February and March. 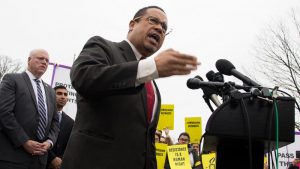 Agenda:   The GOP tax plan is a giveaway to wealthy corporate donors and the rich. Join DNC Deputy Chair Keith Ellison to discuss fighting back against the new GOP tax plan in 2018 and promoting an economic vision that is inclusive for all by partnering with, and engaging, grassroots activists across the state!
RSVP: Here!