The Democratic National Committee (DNC) passed historic reforms at their Summer meeting in Chicago, Illinois last week, but the issues and the outcome are still a bit confusing to those outside the daily political realm.

For my more informal download on what went on at the conference, see below my interview by Genevieve Thiers, mega-entrepreneur and braintrust behind NewFounders.

NewFounders is a hub for politically motivated, tech-driven leaders, dedicated to both showcasing the next generation of rising politicians, and lowering the barriers of entry into politics for all by providing them with free tech, design, and usability tools to be successful.

Like DemList, they are just here to help the cause.

Gen: At the recent Democratic National Committee (DNC) Summer meeting in Chicago, I was able to meet up with a new friend, Kimberly Scott, who runs Demlist, a daily political column dedicated to informing Dems and allies, out of Washington, DC.

She has a real bead on the DNC, and it was excellent to be able to walk around and meet people and learn things with her. Since she knows a ton, I asked her to interview with me about the role of the DNC, the recent meeting, and the future.  Here's a bit of our interview, below:

Gen:  What is the role of the DNC anyway?  I feel very few of us not in politics on the left have a solid handle on that, besides electing a president every four years?

Kim:  In short order, the DNC is the formal governingbody for the Democratic Party.

Sidenote: It is also the longest running political organization in the world. Thomas Jefferson founded the Democratic Party in 1792, but the DNC was created at the 1848 Convention in Chicago, site of this week's meeting.

It is the national umbrella organization for the Party and its affiliated campaign committees, which support the election of Dems running at the national, state and local office levels.
The DNC also runs the Democratic National Convention (a highly recommended experience), held every four years to elect our nominee for President and determine the party's official platform (position on issues and ideology).

Gen: That's so interesting.  And it explains a few holes. Like, for example, there is nothing at all about usability in here, or making politics easy to engage with. It's more around electing democrats, formulating policy, running the convention, and some fundraising?

Kim:  It is a multi-faceting operation. Tech has become a major focus -- and, with the hacking of the DNC emails during the 2016 presidential, in ways we least expected.

It is not enough that your campaign or operation is technically sophisticated; it has to be protected.
In January the DNC brought on a full tech team, headed by former Yahoo and Twitter tech guru Raffi Krikorian as Chief Technology Officer, to work on cybersecurity.
I do believe the Party is rocking it on messaging, voter and diversity outreach, and the public fight on policy issues, but getting the tools to the people is always a challenge. Also why outside groups like NewFoundersare important. Getting independent help to individual campaigns, particularly to open seat and challenger candidates, who have less experience and resources, is key.

Gen: Were there any big topics?

Kim: Absolutely. Nothing like radical and historic reform proposals to the Party's Rules to set the stage for major drama - and there was plenty of it. 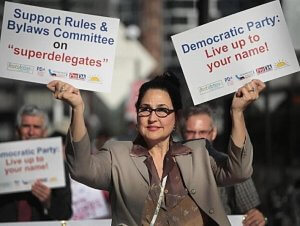 Throughout, the conversation in the corners of the Hyatt Regency lobby bar, meetings, caucuses and receptions, was focused around a controversial resolution regarding the voting rights of DNC Delegates (members) themselves.
The debate was over the presidential nominating process and an attempt to counter negative public perception, most distinctly that of millennials, over the influence of Superdelegates in deciding the Party's 2016 nominee.

Gen:  For those new to this, what is a Superdelegate?

Kim: It is complicated, even for insiders. Here's the deal:
There are two categories of Delegates that elect a presidential nominee. The first are pledged Delegates that go to the convention representing the votes of their state for a candidate, as decided by the individual state primaries.

The second are unpledged "Superdelegates" who include 200 elected DNC Committee people from each state and territory, elected every four year, and who work year-round, as a voice for their Dems back home on national party business.  Historically they have a vote in deciding the nominee, but are free to vote independently, and are not bound by the outcome of their state's primary vote on a candidate.
Additional unpledged Delegates also include State Chairs and Vice Chairs, current and former Democratic Presidents, Vice Presidents, Governors and Members of Congress, and reps from each of the Party's affiliated committees. The final group is made up of roughly 75 appointed Delegates, approved by DNC members, that represent different constituencies (like labor, minority, LGBT) and leaders "at-large." 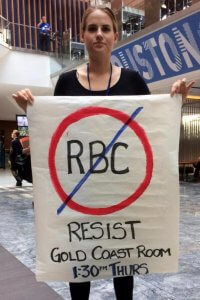 Gen: So talk us through the resolution. I think I just saw it in the news?

Kim: The third and final day ended with an appropriately dramatic conclusion.

The vote was a culmination of months of debate that started with the Party's Unity Reform Commission, a body that grew out of the contentious 2016 presidential primary battle and convention nominating fight between Bernie Sanders and Hillary Clinton supporters.
The uproar centered on Superdelegates, most of whom supported Clinton, and claims their votes unfairly pushed the nomination over the top in Clinton's favor.
Out of the Commission's recommendations came a resolution from the DNC's official Rules and ByLaws Committee to reduce the role of Superdelegates by eliminating their vote on the first presidential nominating ballot -- thereby ensuring the nominee is elected by the grassroots, pledged delegates from the states.
If the vote goes to a second ballot (which hasn't happened since 1952), then the unpledged Superdelegates get to vote at that time.
Opponents claimed the resolution disenfranchised minority and constituency representatives, appointed specifically to ensure that those interests are represented, as well as those who were elected to the DNC by Democrats in their state, specifically to represent them at the national level.
In the end, new Delegate reform prevailed.

Gen: That seems like a sign of party unity right now, vs disunity! They managed to figure it out. It was messy and hard, but they figured it out. No huge factions leaving, or anything.

Kim:  There were a number of positive developments coming out of Chicago and, regardless of where you came down on any issue debated, it was was a healthy debate. These are all people who work very hard, and usually at great sacrifice, for what is ultimately a collective goal.
In the end, and in truth, unity also prevailed.

Kim:  Heinlein said, "Until you've been in politics you've never really been alive.  It's rough, and sometimes it's dirty, and it's always hard work and tedious detail. But it's the only sport for grownups; all other games are for kids."   Highly recommended.

Read the full interview and more scoop here!
Learn about NewFounders, signup for the mailing list
and info on their next conference.